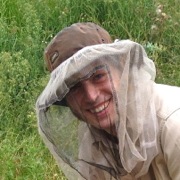 Tim is a second-generation beekeeper, growing up on a large apiary in the foothills of the Blue Mountains. Along with his wife Emma, he is the founder of the award-winning Malfroy’s Gold honey label, and has been practicing organic and biodynamic beekeeping since he started keeping his own bees in 2006. In 2008 he was the first beekeeper in Australia to build and trial a Warré hive, and traveled to the Apimondia in France 2009 to take part in the first conference session on Warré and top-bar beekeeping.


Tim has been teaching Milkwood’s Natural Beekeeping course since 2010.