Figuring out the puzzle of successful pastured pigs has been interesting, but luckily we’ve got excellent mentors like Joel Salatin to help us along the way.

One technique Joel explained to us during his visit last year is how he trains his piglets to ‘respect the fence’ at an early age so you’re not chasing after runaway piggies. This year we got a chance to try it out and it’s proved a really useful technique – simple, and effective… What we don’t want with our micro pastured pig systems here is to spend our time chasing runaway pigs out of important plantings or dams. What we do want is happy, contented piggies who stay in their allotted patch so we can let them celebrate their pigness while tractoring ground that we want to regenerate.

The solution is to train the pigs to respect the electric fence while they’re young, in as short a time as possible. That way, we can get on with letting them out into pasture quicker, and go on with the next job of the day. The setup for the piglet training ground is simple: a small triangular area, where two of the sides are pig-proof, and the the most accessible side is electrified fencing at a high voltage (enough to give a pig a big surprise, but not enough to hurt it). Inside this small area you have the pigs food, shelter etc for the week it takes them to understand the nature of the electric fence.

It doesn’t take long – one good zap each, and the piglets had decided that going anywhere near that electric fence stuff is not their cup of tea… so they hang out in the remainder of the triangle.

The thing I like about this system is that only one side of the triangle is electrified – the pigs aren’t in a ‘fear zone’ where there’s danger in every corner. Thus they learn pretty fast that going near the white two-strand electric fence is a dumb idea, and hang out in the comfort and safety of the rest of the triangle, like the happy little pigs they are.

And because of the limited size of said triangle area, all the pigs get their chance to learn what’s what.

This training system results (according to Joel’s experience over many years) in pastured pigs who collectively respect the fence and don’t make a break for it, because they’ve all learned as piglets that the white fence strands bite.

In a small farm system like ours, having pigs who don’t break out is pretty important – we’ve an intensive system with many things close by that we really don’t want the pigs to get into (intensively planted forest garden, market garden, garlic beds, house dams etc etc).

At the same time, we want an energy efficient solution for pastured pigs that doesn’t require four hours to move them onto new ground… so the simpler the fencing system, the better for everyone, including the pigs.

In time we may go down to one electrified wire instead of two strands, as Joel uses to great effect at Polyface. But while we get the hang of this pastured pig thing we’ll leave it at two strands, to be sure the pigs stay where we puts them. Pigs all trained up, respectful, and out into their first patch of pasture Following their training week, Floyd fenced off a bigger area and set the 6 piglets up with two strand electric all around. They’ve been loving it ever since, as there’s plenty of space to dig for roots and sleep and play and generally be pigs. Following a visit to Taranaki Farm for part of their Joel spectacular last month, Floyd got a lead on these great pig waterers. Pigs need clean water available at all times, but if you give them a trough they tend to turn it into a wallow and jump right in.

These pig waterers are activated by the pigs’ snout nudging up against the brass valve- this pushes it in and fills the small bowl with water. Once the pig stops nudging, the valve shuts, closing off the water. Nice one.

The water for these pigs is gravity fed from our top dam via a hose point, but you could use this system anywhere by adding a pickle barrel to the back of the waterer and filling that up every other day (noting that pigs drink an awful lot once they get bigger). Piglets figuring out the waterer – it didn’t take them long So we’re off at a trot with 2-strand. It’s proving much quicker to set up than the electrified netting we were using previously, though that electric netting is indeed a brilliant solution for cell grazing many other animals (sheep, for instance, who seem to calmly disregard stranded electric fence in our experience).

We’d also been told that someone had had bad experiences with netting and pigs, with them getting tangled in it. That said, we know other folks who have been using the netting with pigs for years with no problems. Hmm.

Ultimately at Milkwood we want to be doing forested pigs, which means weaving electric strands through trees to set up each new pig patch. That’s going to be much easier with single or double strand electric, so we’re learning what we need to learn now. Berkshire’s at Allsun Farm cleaning up a brassica bed Nick setting up netting for our previous round of pigs The lower swale area after the first pass of pigs, with green manure seeds sprouting (not as much as we’d have liked, but we’ve had very little rain) – early November 2012

Piglets in their first patch, about to move on through for a second pass before more green manures and then intensive holistic orchard planting next winter during planting season.

Like any system, it’s a learning process. But we do love pigs here for all sorts of reasons, and I think they’re an excellent addition (whether seasonal or year-round) to any small farm system. Pigs are great for cycling veggie + fruit wastes, building fertility, and of course providing the most ethical, local and scrumptious bacon you will ever eat.

Just a note for pastured pig enthusiasts that we’ll be hosting Joel Salatin for a Masterclass on Pastured Pork and Beef systems aimed specifically at the small acreage farmer at Jamberoo NSW in February.

It will be a jam packed day of in-depth knowledge and details of how he’s designed and managed his pastured beef and pig systems at Polyface Farms to regenerate his farm while providing his family with a great livelihood. 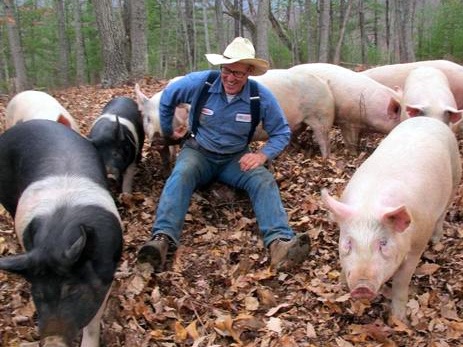 Yes, train them while they are young! Our big girl, Rosie, grew up without electric and she just walks through the electro-wire. We have to use bare wire with her. Luckily she has finally learned, but boy was it exciting teaching her!

Graet post Kirsten. Thanks for keeping us updated on the pig fencing. I am so keen to have pigs here, but we are not in a position to be chasing wee piggies all day. Really hoping that Salatin’s electric fencing model works well. Thanks for being our ‘guinea pigs’. Looking forward to hearing more about them.

Thanks Virginia, happy to be your guinea pigs 🙂

When I was reading this article and got to photo No. 6 and read “Pigs all trained up….” I glanced back at the pic and quickly thought you must have been training them down a slippery dip before I went back into the story line of electric fencing. I wonder if pigs can “hear” the pulse of the electric fence and be able to escape when the fence does fail to operate, say at times of power failure, limbs over the fence or some other short out of the line due to ferals coming through. We have had milking goats… Read more »

Hi Jim, we have good solid boundary fencing and haven’t had any probs with feral pigs thus far – but it’s a point to consider, thanks!

Hi Jim, The pigs don’t seem to understand the click indicates the fence is one. On the few occasions the fence has been mistakenly left off they still respect the fence. These piggies are raised for food, so they are likely to be slaughtered by around 6 months. This is about the time that they will come into season. The last ones we kept were 90kg (dressed) at about 7 months, which is a lot of pork. No boars came around to bother them and there are wild pigs in the area. This time I think we want smaller/leaner carcasses.… Read more »

Does going down to one wire mean you can have a larger cell using the same power supply? I can’t see why else you would go from two to one wire. 🙂

I can imagine the happiness of the pigs raised in this system. They’re working/digging for addional soil-based food and naturally interacting with various life forces and power of nature. In the process, making them healthy and probably reflects a harmonious chromatogram.

Hi Nick and Kirsten (and others!) Have you any thoughts on managing the nobbliness of the ground after the pigs have been through please? My pigs have left areas in the orchards and pastures very lumpy….tried large numbers of poultry but usually resort to hoe as have no machinery…big job. Funny story about pig intelligence. My girls would build a mound of soil over their low electric fence and trot over smiling at me as they went…. had to break habit with 5 strand fence for few weeks :o)

Celia: We are covering the freshly pigged up area with a good layer of wood chip and green manure seeds, as the area is to be used as a holistic orchid afterwards. Because of this, I am leaving the pigs in there longer then I normally would, so they provide maximum disturbance. Additionally, I am moving the piggies across the slope on contour, and their excavation activities are creating mini swales for us. They tend to push everything down hill, so the bottom boundary wire ends up being the new pig-swale line.

So here I am way up in Canada, searching high and low for effective portable hog watering systems so I can do pastured pigs, and what do I find when checking in on one of my favourite permaculture blogs? A Canadian hog watering system that looks perfect. LOL…thank you.

Nick, I’ve left my fence de-energised for more than a week some time ago. Our three pigs kept to their side of the fence, thus silencing all the naysayers that were telling us there’s no way we’d keep our pigs behind 2 wires. Sometimes they do touch the (live) wires by accident, and that just helps to reinforce they shouldn’t touch it. The fact that it didn’t do anything for a week didn’t seem to register. But a single strand… Mmmm, there-in lies the next challenge. Let us know how you go with a single strand. Good post though, keep… Read more »

Hi Milkwood. I got 2 pigs after working at Boxgum grazing for a few months. Their pigs were so well behaved. Ours are not. They are nearly 6 months but not yet ready to go to the chop. We have them in the chicken netting as they consistantly got out of the 2 strand we had on the solar energiser. We need the netting back for the chickens. We changed to the mains to give them a bigger shock. They still go though within 24 hours. We have a reading of 9 on the meter. Luckily they don’t run away… Read more »

0
Reply
Go to Top
wpDiscuz
20
0
Would love your thoughts, please comment.x
()
x
| Reply
Send this to a friend