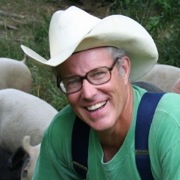 Joel Salatin of PolyFace Farms is a world-leading example of how a small family farm can become an extremely diverse and profitable Local Food producer, and how the benefits of Local Food Systems can create resilence, stability and abundance for both local farmers and the wider community. Featured in Michael Pollan’s book, The Omnivore’s Dilemma, and in the films FRESH and FOOD, Inc., Joel and his family at Polyface Farms exemplify successful small-scale farming and the growing relocalization movement.


Joel delivered masterclasses in poly-culture holistic grazing of cattle, chickens & pigs as well as marketing and farm succession for Milkwood in 2010, 2011, 2013 & 2015 in Mudgee, Sydney, Kiama & Melbourne.