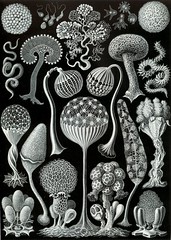 Considering that all plant life grows out of it, and therefore the majority of our diet depends apon it directly, you have to admit that soil is pretty funky stuff.

Having been initiated breifly into the implications of soil biology, the importance of topsoil (ie stuff which is not just inert dirt) and the general lack of knowledge surrounding the environment which harbours the worlds largest organisims, I was utterly stoked when this workshop, “The Benefits of Biologically Active Soils in Drylands” came up in Wellington, abouth two hours west of Milkwood.

Added to the basic fact that it was a day explaining the roles and importance of soil biology to drylands farming, it was also taught by the Queen Sheba of soil, Dr Elaine Ingham…

In summary, the workshop focused on the basics of the ‘soil food web’, which is a widely accepted term for the fairly complicated arrangement which is all the components of that which we call soil… ie organic matter in various stages of decay, fugi, bacteria, nematodes and protozoa, with a couple of pebbles and ground-up minerals thrown in. This workshop explained the basic relationships between these components and how they interacted with the roots of plants at large, and how complex inter-relationships could be built or destroyed, depending on the environmental and man-made forces present. Dr Ingahm went hard and fast into murky and unfamiliar territory for the assembled audience of perhaps 60 farmers and viticulturists (and me), and her blatantly outspoken stance on chemical companies, chemical fertilizer and established broadscale-farming practices was a sight to behold.

However, having established just how vehement she was about the illogical approach to farming and soil that has been pushed apon farmers since the 1930’s, Dr Ingham then went on to give in-depth and detailed examples of alternative processes. These techniques could be used to increase yields, specifically prepared the soil to produce a chosen crop, saved substantial amounts of water (30-60%) by creating correct soil structure and therefore increasing the ability of soil to hold water, and basically saved the day. This was done by use of compost tea and implementing a thorough knowledge of what was actually going on beneath the surface of the fields, and how to improve and/or grapple with that. It was truly inspiring stuff, and you could hear the entire audiences’ brains clicking into overdrive in an attempt to absorb the cataclysm of information and implications that this workshop handed out.

In addition to all this information, we had the chance to look through a 400x microscope at any soil samples that we’d brought along. So I had, at 5am that morning, dutifully scraped away a bit of the grey matter beneath one of the inlaws’ olive trees and brought it along in my little snaplock bag. I waited my turn with farmers cradling similar containers (or vegemite jars) with various sad deposits of minerals that we called the soil off our various farms. I was really worried I would get a ‘dirt’ reading from mine, but hurrah! it was highly bacterial… which is not actually very good for olives or any other treecrop, but at least life was a-rumbling within the particles. I learnt at the workshop that the soil creation cycle begins (ie progresses out of dirt) with a high bacterial content when the soil is anaerobic – which can be because of compaction, use of chemicals, tilling, loss of topsoil through erosion, or whatever else has caused the soli to be in an airless, dense state. With the introduction of early succession species of plants and various nutrients, the highly bacterial soil gives way to more and more fungi, until you end up with a highly fungal soiltype, as you would find in a functional forest ecosystem, for example. So trees like olives and whatever else ideally want the soil to be slightly on the fungi weighted side, as that ecosystem is basically tending towards complexity and therefore a more fungi-based state. In short, we have work to do to get the family olive grove in good shape, but it is incredibly comforting to have even a slightly better idea about the fundamental relationships between plants and soil, in order to be able to actively improve things on this front.

Over lunch I was speaking to a lovely old farmer of about 75 years of age, and he was saying how good it was to see a ‘young person’ there… one thing he said really stayed with me – it was something like: “us old fellas show up to these things because we can remember what the country used to be like 40 years ago, when things actually grew, before the chemicals… and I’d give anything to figure out how to make that possible again…” I overheard multiple conversations about how everyone’s chemicals weren’t working and there had to be another way because they couldn’t afford the damn things anyway… so it was interesting to me to realize why the majority of the audience were there… because chemicals were getting too expensive, the soils were completely leached of life, and everyone was wondering what the hell they were going to do… and despite this rather arid state of affairs, sustainable techniques like compost tea application and attention to soil biology were moving ahead in leaps and bounds, with very impressive success stories that benefited both the farmers and the soil itself… so, whatever works, I guess – whatever way forward it takes…

Lastly, as ASAP were co-ordinating the workshop, they had one of their compost tea brewers on display – which duly brewed and aerated all day long, until the resulting liquid was doled out at the end of the workshop as samples to take home. I scored a container full, with the intention of taking it home to try out on one of the inlaws olive trees which is affected by black scale, to see if it would improve it at all – stay tuned for more on that one…. 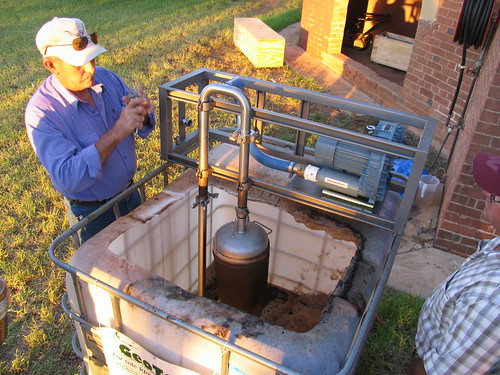 compost tea aerating away during the workshop

So all in all this workshop was really quite intense, but excellent. All the audience left chatting madly and brandishing about containers for compost tea samples, and I noticed that the most.. erm.. skeptical questions in question time came from men with folded arms who, incidentally, had all bought at least two of the many textbooks on sale at the workshop, relating to soil biology and compost tea techniques. So curiosity for sustainable broad-scale agriculture seems to be alive and well in the central west.

Dr Elaine Ingham runs the Soil Food Web , which has an Australian site , and offers a barrage of courses and testing services relating to soil… their online shop contains most of the texts that were available at the workshop, and the rest are available at ASAP’s website , which also offers commercial scale compost tea brewers… both these sites have an intricate wealth of information on this topic, and are a great starting point for this complex but upsettingly important subject.

Big props to the CMA , who offered discounts to attendees from the central west, which was probably why so many showed up..  hurrah for sustainable incentives! 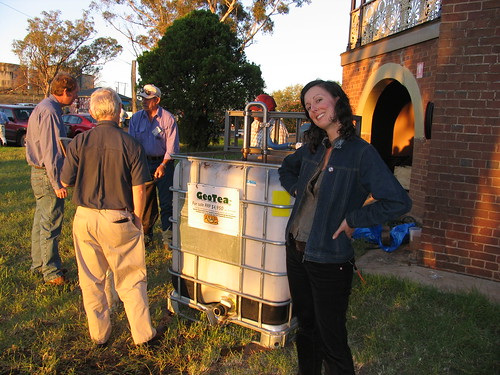 Please send me video how to make compost tea ? what is the materials ? details the components of the brewer? please send me more pictures of brewer.
Thank you for your co-operation
Dr. Monier Morad
National research Center
Cairo-Egypt.

Sent you a bunch of info via email, Dr Monier 🙂

0
Reply
Go to Top
wpDiscuz
5
0
Would love your thoughts, please comment.x
()
x
| Reply
Bookings for our next class of Permaculture Living are open this week.
Join us!
Send this to a friend