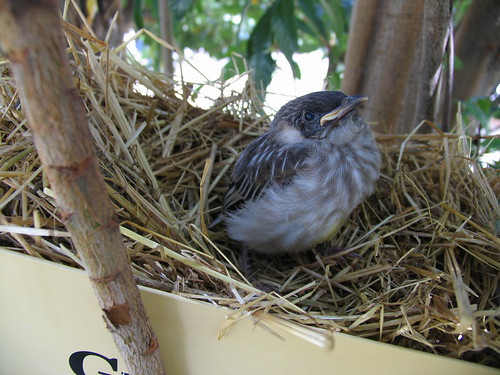 The Loquat tree next door at Kirwin is a mighty beast – and it is much beloved by many of the birds hereabouts. Its got dense green foilage year round, doesn’t give a toss about frost, becomes a humming tree in winter as the bees go crazy with all of its blooms, and then has masses of fruit before Christmas. If only I could strike it from cuttings… but apparently it grows well from seed – yay. It is definitely a power tree and i want as many as i can possibly have all over Milkwood.

While poking about in my nursery, which sits underneath this great specimen, today I discovered a new little friend on the ground. He’d fallen out of his nest which is way, way up at the very top of the tree (a sort of messy openwork arrangement of sticks), and from the look of his anxious mother, he is a red Wattlebird. Given that Cobba, the kelpie sheepdog, is also housed under the Loquat, i thought I’d make the little cheeper a temporary nest to prevent him from becoming Cobba’s supper. 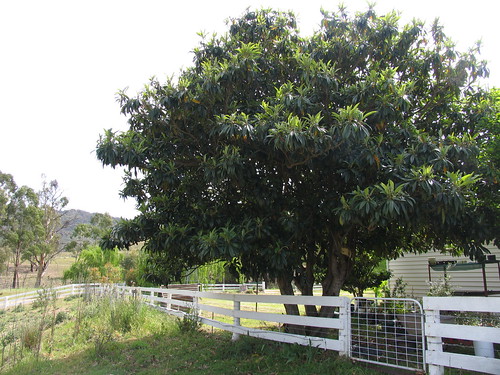 So now he is happily housed in a shoebox on a branch, and his mum comes and feeds him regularly, along with his sibling who is still way up in the tree, wobbling precariously on a branch. I take it both babies are out of the nest and stretching their new legs, although both can’t actually fly yet, it seems, and the little cheeper got a bit ahead of himself and ended up on the ground. I don’t think they’re far from flapping about though – maybe a couple of weeks? 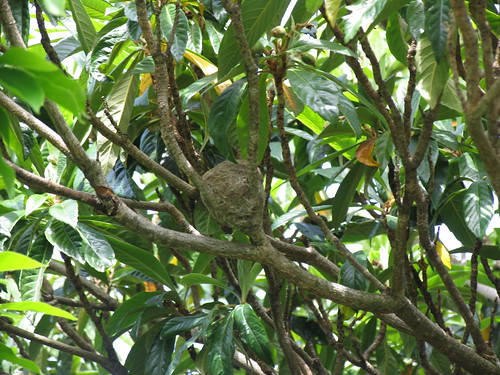 Hi Kirsten,
5 years on, I’d love to know if how you have gone with loquats. They seem to me such a great (or potentially so) home-produce tree in so many parts of Australia and only lose popularity for being too hard to get to market. Tried and tested, they don’t have potential, they have a solid track record. Plus they are reputedly good bee forage. And spring fruiting is such a wonderful thing, at least for those of use for whom fruit fly later in summer/autumn is a bane.
Cheers,
Oliver