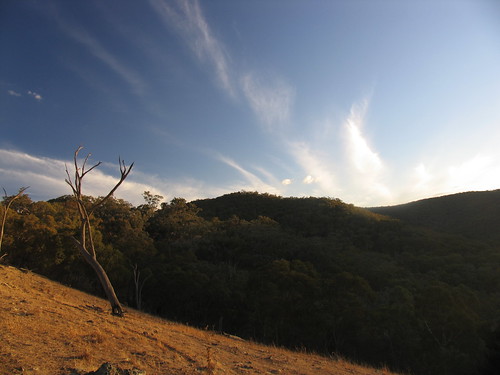 Milkwood in 2006… yet to become carbon sequestration central, due to overgrazing for… oh… only the last 100 years or so…

Last weekend Nick and I trooped off to the inaugural Carbon Farmers Conference (the first of its kind in Aus) which was conveniently held in Mudgee, just up the road (it’s quite a long road, though – this being the country and all).

And holy cow it was a jam-packed two days… The conference was set up to thresh out the concepts behind Carbon Farming – a term used to describe the process of sequestering carbon into good, healthy soil. This concept isn’t that hard to grasp – we’re all surrounded by a gazillion ‘carbon credit’ systems at the moment – systems and companies who are offering to ‘zero your footprint’ or ‘make your wedding carbon neutral’ or whatever… and the ethics of that industry is a long conversation in its self, which I will set aside for now (there’s plenty about it online though, if you want to get all riled up).

In short, some soils have the ability to hold onto (sequester) a HUGE amount of carbon. And which soils are they? The incredibly healthy ones, of course! By measuring the amount of carbon in their soils, and then undertaking activities which will increase the amount of carbon in their soils, farmers can then measure this increase in carbon and sell the difference as ‘carbon credits’ on a contractual basis. From here on in it gets a bit more complicated, so I’ll stick to the exciting bit: Farmers can get Paid to build Really Healthy Soil.

Really Healthy Soil does not come in a packet. It does not come from the local outlet of the chemical company who have been pushing their wares on western Farmers for 50 years. It comes from real land management – sustainable farming practices that don’t rip up, wear down, wear out, dry out or poison the earth, the ecosystem, or us.

Really healthy soil, which is a full-on, kick-ass ecosystem of microfauna, plants, roots and fungi, also happens to be… well… what everyone wants anyway… so… it’s really quite a good idea. Farmers can get paid to basically repair their farms to a state where the soil is once more capable of holding life without the incredible amount of chemical and high-energy inputs that broadscale and intensive farming currently involves. Hurrah to that. 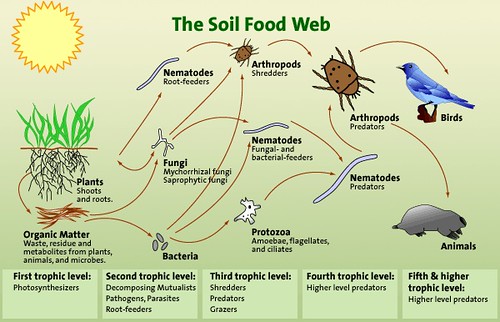 So this conference was great fun. A mixture of speakers which covered a wide spectrum of voices involved (or wanting to be involved) in this concept… with a couple of notable exceptions, the attitude of speakers was positive and inclusive. It was really great to see a mixture of old-timers and younger farmers from across Australia who really did give a damn about the future, daunting as it may be (especially when you’re an Australian farmer). It did seem to me that most of the people there were either involved with, or wanting to be involved with, farming practices that were actually sustainable in the long term.

Speakers and projects of note:

– Mike Walsh: speaking from the Chicago Climate Exchange in the US via video conference on carbon trading in the US.

– Col Seis: great example of some funky techniques around pasture cropping and ‘biological farming’ (a nebulous term, but still…). One of his crops is native grass seed.

– Cam McKellar: biodynamics in a broad-ish-scale context – and lots of pasture cropping.

– David Marsh: “harvest the interest, not the capital from the landscape”… what a guy – dyed-in-the-wool type old-school farmer.

– Louisa Keily : one of the organizers of the conference, talking on soil carbon trading schemes which might actually work.

If anyone’s interested, I believe the Carbon Farmers mob will be putting the whole conference and all the presentations online soon. And if you’re feeling particularly chipper, you can check out various recent reports released by the Climate Institute and Greenhouse2007.

And then once you’ve read those reports, go dig a vege garden. Or have a stiff drink. Or even better, go have a stiff drink in a vege garden, while resolutely deciding apon your chosen positive course of action, rather than crumpling and locking yourself in a cupboard. And bend down and give the soil (albeit probably beneath concrete and other impediments) beneath your feet a bit of a pat and offer a word of thanks… because everything that sustains our species, at some point in its cycle, depends on soil to exist.