Back from the Brink by Peter Andrews

Out in the rural areas of NSW (and probably in other states of Australia as well) this book has been causing a minor furore. Country town bookstores were selling out of all their copies in a day, everyone was talking about it, everyone wanted to read it, everyone was ordering in a copy for their father/wife/husband/themselves because the word on the street was that it contained mighty important information about how to drought-proof your land.

This book is quite seminal in the fact that it addresses the Australian landscape for what it is, rather than for what it is not. And that is quite rare (in my experience) when it comes to texts on producing yields (animal, vegetable, whatever) from the Australian landscape. I am quite consistently amazed at how little is considered when we set up systems in this country with the intent to produce something from the land. And by this i mean land in every sense of the word – from the large-scale agriculture which feeds us to our private courtyards and our front lawns.

Peter Andrews has been developing the techniques outlined in this book for over twenty years, by looking at the lay of the land, how water runs across it, and what seems to depend on what within the ecosystems that he was managing farms and horse-studs on…

This book is valuable i think for a couple of reasons. Firstly, it has a broad reach. Andrews is endorsed in his views by the National Party and a host of other bigwigs in business and such within the rural sector, and this has lead to Back from the Brink being seen as something that comes from an authoritative, dependable voice. Secondly, this book is a result of a really rather fascinating Australian Story episode from ABC, which profiled Peter and his work. So therefore it makes it into the ABC bookshop side of things as well as the more specialized rural sector. Thirdly, Peter goes out of his way to emphasize the uniqueness of  the Australian landscape, and its relationship with water and available nutrients – something which is still being understood, explored and negotiated by just about everyone from Jamie Durie to the CSIRO . And i think, as a picture of a very individual understanding of the Australian landscape and techniques for approaching it for farming and cultivation, this book is very important.

I would actually recommend this book to anyone trying to get a handle on the psychology of how we as westerners have approached the Australian landscape. But I would also recommend that anyone reading this book should also have a look at Introduction to Permaculture or, if you’re brave, at Permaculture – a Designers Manual (by Bill Mollison) or Permaculture (by David Holmgren) – because i think these texts take the kernel of what Andrews is trying to develop and take it to the next ball-park. All that said, i think Back from the Brink will end up being an Australian classic text for its era, for what it proposes and how it asks us to see this wide land of droughts and flooding plains. 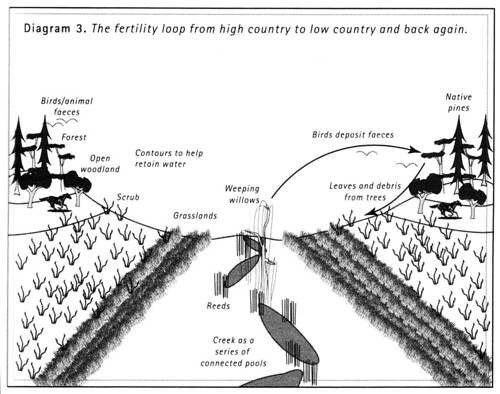 Back from the Brink – illustration on page 99