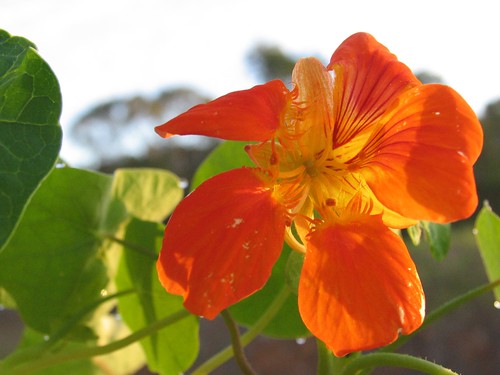 Over the last few weeks we have FINALLY managed to begin on the vegie garden so I thought now would be a good time to start another Milkwood ritual – The Change of Season Vegie Garden Report! 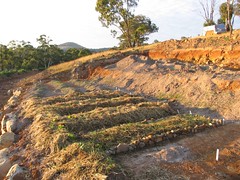 Being on the bottom half of this great big beautiful blue ball summer has slipped away and autumn is upon us. The evenings are getting chilly already.

While we were digging our first dam, we got the local earthmoving company to bring in a ginormous yellow excavator to dig two big terraces just uphill from the dam. This is the spot we (hope to) will build our little strawbale studio, the first part of our future home.  Trying to follow the “oftenest = nearest” permaculture principle we extended the terraces to the south east to create a very large space for our kitchen garden, only about 10 meters from our back door. 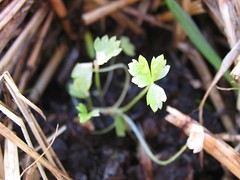 Each terrace is 20 metres long and 5 metres wide (65ft x 16ft) which gives us a collossus vegie garden of about 200 square metres (over 2000 sqare feet). Of course after the excavator had finished digging we were left with a lovely surface of clay and rock.. not exactly garden of eden material. Lucky for us there was quite a bit of topsoil left over after covering the dam wall, so we got Justin the driver to dump that over in the vege garden area and last week I started the serious labour of shaping this topsoil into the basic form of garden beds. Gotta love the burning feeling of geek body meeting spade and barrow. So far I’ve only found time to make 4 beds about 4 metres long by 1.2 metres wide (double reach beds) 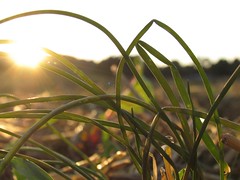 Around here when we talk about topsoil what we really mean is powdery ash like clay of the sickly grey type. Really we are only expecting to use the ‘topsoil’ as a base for no-dig garden beds. So we piled on the compost that Kirsten has been making along with some well aged poo from aunty Linda’s chickens and a very thick layer of spoilt oaten straw we got cheap from a local farmer.

Now the first frosts usually hit us in April so we only have two months at best to get any real growing going on. This somewhat limits what’s worth planting. I want to put in a heap of broad beans and a bunch of other assorted legumes, even if we don’t get a harvest from them they will improve the soil and produce a lot of organic matter. In fact I have planted a whole bed of mixed lab lab bean and cow pea. So far we have planted leeks, red onions, celery, chives, parsley, nasturtium and garlic chives. I’m even trying a few potatoes that started growing in the pantry.  I also have to admit that I cheated a little and bought a punnet of rainbow chard (silverbeet) seedlings from the garden centre in town. 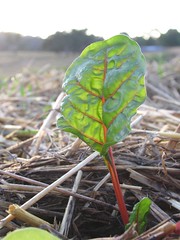 Autumn will be a serious season of planting, the summer has been quite wet so we really need to take advantage of all the moisture that is in the soil. Apart from the vegetables we want to get as many trees planted as possible so they can establish themselves over the cooler months.

With all the earthmoving going on it’s taken us a while to finally plant some things in the ground, but it feels so good to have started…  we really have begun Planting Milkwood. Oh I nearly forgot… WE HAVE CHICKENS…. and a chook dome for them to live in, in our next video I’ll show you my attempt at making a movable chicken dome so we can kick start our food forest using CHICKEN POWER.

Whats been going on in your garden over the change of seasons?