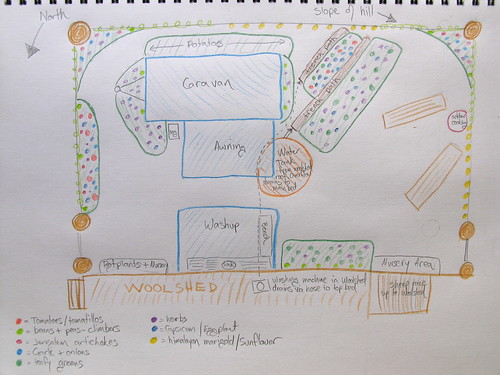 Basecamp gardens plan – click for enlargement. As for my illustration skills, that’s what happens when you spend your life on a laptop – you draw like a 12 year old…

Planning, making and planting the gardens around Bascamp has become one of my favourite parts of the week, and we are finally starting to feast on the results! I really cannot believe that i didn’t garden for the first 30 years of my mishappen (but oh-so very full) life… what was i thinking? This is great! And you can eat it! Yum.

I started planning the Basecamp Garden as a result of a kick up the bum, thanks to some Canadian friends who stayed here over winter, and who sort-of barged in and constructed a no-dig mainbed next to the caravan. As I’ve mentioned earlier, up until this point we were trying to keep the Milkwood Kitchen Garden going while living over the hill… and it just wasnt really working. Start at your front step, work from there. I should probably get that statement tattooed somewhere…

So following the Canadians de-planting (from the Milkwood Kitchen Garden) and re-planting (in the Basecamp mainbed) all existing living vegetables, we had a starting point at the end of this winter past. And then we found out we were pregnant, and I had the standard pregnancy freak-out about shop-bought fruit and vegies (regardless of how pure their label says they are)… add to this we had always been planning to eat off Milkwood as much as possible, we just hand’t gotten into the swing of that aspect of things yet… building somewhere to live and establishing hydrology will do that to you… but enough of the whys and wherefores… the point being that we have begun, and it’s looking better every day. 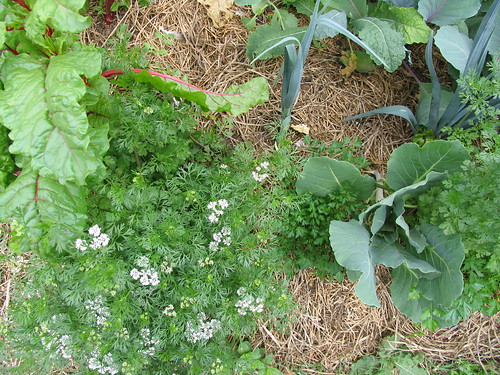 Coriander flowering in the mainbed

I tried to design the Basecamp gardens with a couple of things in mind;

And, in short, the above diagram (no comments on my illustration skills, please) is what I came up with. So far, this plan has been working out really well, due to basic attention to the above factors, particularly utilizing aspect, shelter and driplines. All beds are no-dig beds, which is a good quick method outlined here. Oh and of course, extra heavy mulching of all garden beds to guard against evaporation… no soil is visible anywhere in the Basecamp garden, it is all safely 20cm or more under a nice thick mulch of straw, which builds soil as the garden grows. Our yeild is currently such that we are eating out of the garden every day, even though all beds except the rip-roaring mainbed are yet to produce anything of edible size (due to the late frosts here – the growing season is, infact, only just this week starting to get going). There’s a couple of features to this design worth noting:

Utilization of greywater + water tank overflow: on the western side of the caravan are two beds that have been build on contour with the slope of the site. Above each bed is a trench path about 30cm wide and 20cm deep, which runs the length of each bed on its up-slope side. Each trench is filled with sawdust. The trench of the upper bed gets a direct output from the washing machine in the Woolshed, and this weekly influx of moisture fills up the trench and proceeds to slowly filter downhill through the bed, and all the vegies in that bed go suddenly wild with delerious thanks for the extra moisture arriving directly at their root zone. If we do two washes, the moisture continues into the trench below it and into the next bed below that.

The second trench, directly up-slope from the mainbed, is lined up to receive the overflow from the water tank which collects off the Woolshed roof. Overflowing water tanks around these parts are an infrequent occurrence, true, but you gotta use whatever water you can, whenever it appears. On the rare occasions when the tank does overflow, the same thing happens – the trench fills up, and the moisture filters slowly down-slope through the mainbed, and all the vegies in that bed similarly go crazy. N.B. a system like this depends apon you using a very greywater-friendly washing agent in the smallest amount possible. Knowing you’re going to consume the (filtered) outcome of your washing does wonders for your awareness of such things… 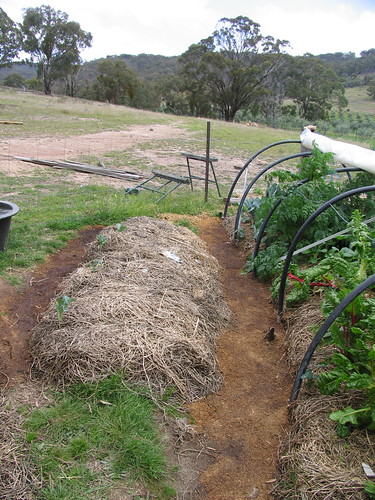 Trench-path beds – the angle of slope is sorta to the right of image – the sawdust holds the moisture in longer, giving it more of a chance to trickle through the soil of the down-slope bed

Aspect: This is making a big difference to what grows successfully where, given the unrelenting sun. For example, the bed which is against the woolshed is the most protected from the north, which means it is the most shaded. So this bed is primarily planted with greenstuffs – spinach, lettuces, the more tender herbs, and basically everything that will get petulant at being constantly bombarded by full sun. This bed is also down-slope from the washup area, and so gets a residual (again, small but significant) amount of moisture from the leaky pipe coming out of the sink, and the garden tap.

Driplines: This is one of those highly residual factors that Permaculture emphasizes so much – the collation of a heap of 1% advantages that coalesce to form a sizable advantage… in this case, the advantage of better plant growth due to that itty bit of extra moisture in the form of driplines. In this context, a ‘dripline’ is the perimeter around a structure where the dew drips off the roof or the eave or just the wall and hits the ground below it. On a farm, (or in a city for that matter) you can see these everywhere if you look closely – it’s usually signified by a slight spike in plant growth… either in the height of a line of grass, a different species popping up in a very confined area, mossy patches, etc etc. If you see one of these near a structure, look up. And you’ll usually see that there’s something for a drip to descend from. At Basecamp, there’s a dripline all the way around the caravan, and a particualrly good one off a certain corner of the Woolshed roof. I’ve made all the beds around the caravan extend under the va
n, past the dripline. This way, that line of moisture passes into the bed. As for the Woolshed drip, that’s where I’m planting my sugarbaby watermelon, which loves all the extra water it can get (apparently, according to its packet).

Other than that, I’m watering everything every second sunset (never in the daytime) and planting twice a week…  and it all seems to be working! Stay tuned for recepies on 61 things to do with silverbeet… 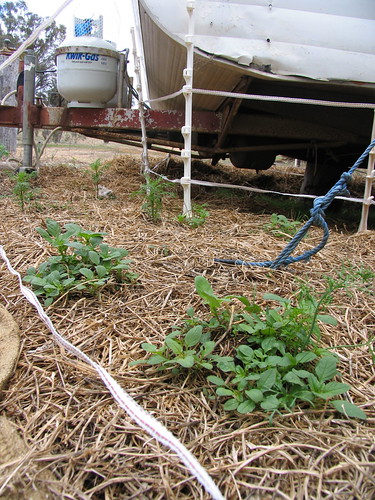 The herb garden, slowly beginning to gather steam after being planted 2 months ago… note that garden bed extends under caravan to pick up that dripline…

Drip line! Wow another new bit of knowledge to hold on to. I’m collecting them for the future when I have access to a bit of land.