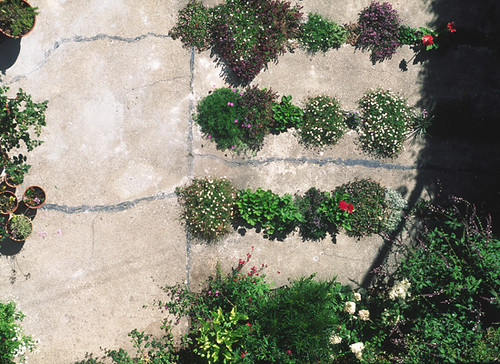 One of the few things that makes me sometimes long for the city is to be part of the kerbside revolution that’s happening here, there and everywhere. Every time i walk past an inner-city grass verge that’s sprouting tomatoes or a roundabout which has seen a bit of guerrilla gardening action I breathe a little sigh of relief, because I feel like I can smell the beginnings of that sweetest of ferments in the air: it’s the beginnings of food security in the hands of people, not supermarkets.

In the last several years, community gardening has taken on new significance throughout the western world. It seems nearly every city now has some sort of kerbside vegetable gardening initiative, victory garden schemes, community gardens, you name it. And hooray to that – we need any and all of these initiatives. We need them because we all need to get more deeply involved in our own food security. We also all need them to get more deeply involved in our community if we’re going to build true resilience in our world over the next number of decades, and gardening is a great way to start. Bring on the edible landscapes…

Not that this is a new thing. Permaculture has been advocating digging up your front lawn and planting it with veggies since the 1970s. ‘Victory Gardens’ were everywhere during World War II. Previous to the onset of heavily industrialized agriculture in the 1940s, pretty much everyone who didn’t live in a flat (and some who did) grew at least some of their own food as a matter of course. And then, of course, there’s the rest of the world, who never really stopped – go down any back lane in many parts of the non-Western world, and you’ll see what i mean – many back steps support perennial polycultures of edible plant and animal guilds, just waiting until suppertime. Now that’s what I call food security. 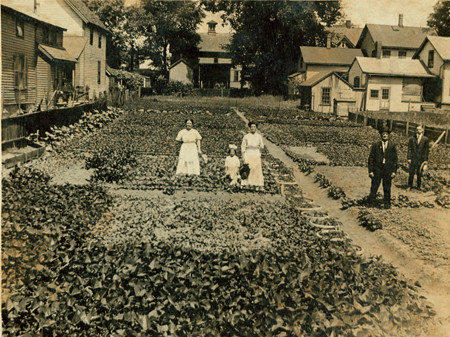 So why do I get so excited when I walk down a street in inner-city Sydney and spy a little kerbside vege-patch? It’s because it is still very much the exception to the rule, i think – that and my hope that each example is the beginning of an infectious and incurable disease that will spread rapidly throughout the entire city until everyone is swapping seeds, arguing about the benefits of the Black Russian over the Mortgage Lifter (both varieties of tomato), and refusing to let the council weed-killer truck even think about turning into their street, so that no round-up comes anywhere near their living food stores.

What I want is for growing food where we live to become as entrenched and as assumed as recycling. No wait, more than recycling. As ho-hum as a daily shower. As inevitable as having to feed the cat. Or feed ourselves. Don’t you sometimes think it’s strange that we feed ourselves at least 3 times a day, but that we so very rarely feed ourselves? What’s all this food outsourcing anyway? And what would happen if the elves didn’t fill the shelves of our supermarkets or gourmet providore each and every night of the week? Hmm. Them kerbside tomatoes are looking better and better. 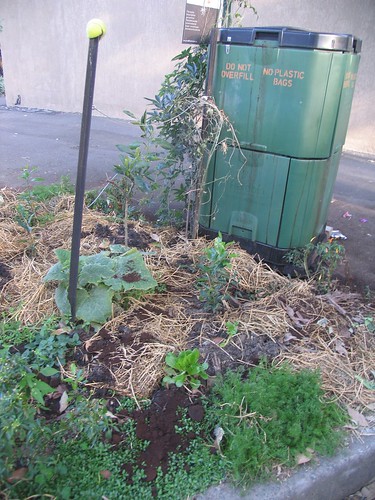 As I’ve been watching this trajectory of community food initiatives grow over the last 4 years, it’s been interesting to watch the balance between the many and various initiatives. True sustainability is an unwieldy beast, however. One season of tomatoes doesn’t always lead to a way of life. And the fact that true community is a living, breathing and eccentric organism means it doesn’t necessarily fit nicely into the available community grant guidelines… so in the process of gathering my thoughts on this topic I’ve gathered a couple of works-in-progress which serve as examples of positive ways we might move forward on this:

Depave: a crew that holds, um, depaving days. Because beneath every concrete slab or drab paved area is a vegetable garden waiting to be born… great how-tos, videos and further reading at Depave.org

Permablitz: an international explosion of DIY Permaculture garden overhaulers, originating in Melbourne, Australia. A fabulous resource site, great community building idea, and includes a list of new Permablitz networks which are being added to all the time. Get into it at Permablitz.com

FutureFarmers: the crew responsible for ripping up the lawn outside San Francisco City Hall and turning it into a hugely public (and successful) community garden. Amy Franseschini and comrades have a heap of thoughtful and lateral projects on what I’m here talking about at FutureFarmers.com

The International Apple Tree Registry: an example of community food-mapping at its most ambitious. Own or know of an apple tree? Add it at OrangePippin.com 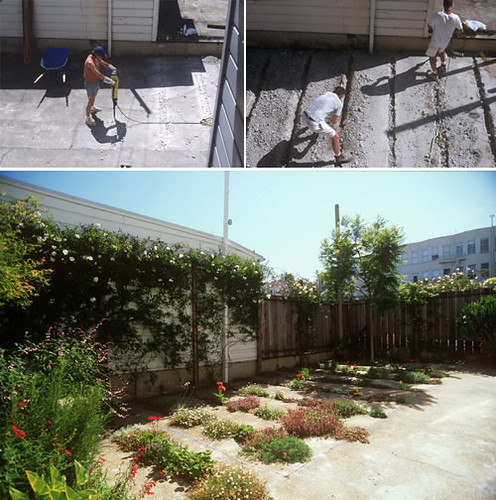 Food for Everyone: something I stumbled across in Sydney recently. Public food plantings and community compost bins on an inner-city street. No centralized website could I find, but you can go take a look for yourself at Myrtle St, Chippendale, Sydney.

Crack gardens: We’ve all seen Nature doing this here and there in the fissures that open up in concrete paths, but CMG architects formalised the idea with a great result. Crack Garden project page.

Farmer in Chief: Michael Pollan’s open letter in the NY Times which got the ball rolling on the Obama’s vege patch at the White House. Read the letter.

I’ll leave it there for now but through a certain prism one might think that the the home-grown-food revolution was almost won… until I pull my head out of this optimistic corner of the internet and back into Aussie reality. But like I said, I rekon I can nearly smell the ferment in the air… maybe it’s just a matter of time and access to good information before we’re all beginning to truly feeding ourselves.