How to Build a Microbat Box Microbats are worth encouraging into your garden.

Not only are they delightful to watch on dusk – they gobble thousands of mosquitoes, moths and other garden pests each and every night.

A single microbat can eat  up to 1,200 mosquitoes and small insects in an hour – which has earned them the well deserved reputation of being nature’s mosquito busters. What is a microbat?

Combine their small size with their daytime sleeping habits – and it’s easy to not appreciate how widespread and abundant microbats are.

No matter where you live in Australia – there’s likely to be microbats fluttering through your night-time sky. Microbats snuggled up for the day – photo by Linda Oliver

Why would you want microbats in your garden?

I convinced my husband that we need to encourage microbats into our garden with one sentence “One microbat can eat 1000’s of mosquitoes in a night”.

Given their voracious appetite for insects, microbats can help control garden and agricultural pests naturally.

Microbats have been used on organic farms as part of integrated pest management programs and on conventional farms to reduce insecticide use.

For example, microbats are used to manage codling moths in walnut orchards and Hickory shuckworms in a Pecan orchard.

Why can’t microbats find their own roost?

After feasting all night on thousands of insects, microbats need somewhere safe and dark to roost during the day.

Many microbats roost in trees. They typically roost in small colonies in cracks, fissures, hollows and under bark.

Trees with cavities suitable for microbat roosts are typically old or dead. The trouble is, old or dead trees are often removed from residential areas for safety and aesthetic reasons.

Combine targeted tree removal with large scale clearing of native vegetation – and microbats are running out of places to roost. How to build a Microbat Box

There’s numerous plans for bat roost boxes available online (see the resources list at the end of this article). Smooth planed timber is also suitable – but the outside surfaces will need to be roughed up so that microbats can easily climb on and around the box.

We used a mix of recycled Ironbark floor boards and a piece of hardwood from our local recycled building materials yard. Once you have you timber and your plan, it’s simply a matter of marking out the pieces onto your timber and cutting them out. 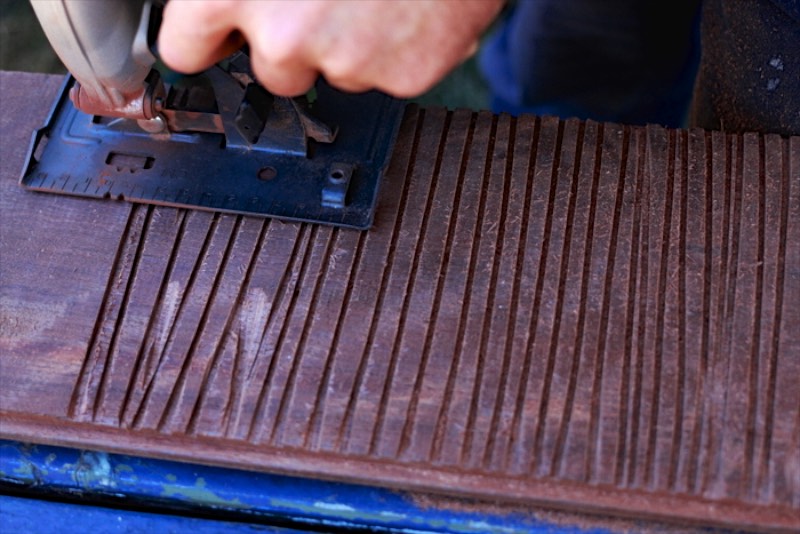 The landing surface and inside of the box needs to be rough so that the bats can climb and hold onto it.

One option is to line the inside with shadecloth or hessian, fixing it in place with staples.

Another option (which we went with) is to cut grooves into the timber.

We also cut grooves onto the outside surface of the side panels given that we used smooth, planed timber. Above is our bat box ready to assemble: An internal block screwed under the inspection lid helps to keep the inside of the box free of draught and light.

It’s important that all screws, hinges, latches and glue be suitable for outdoor use. Providing a variety of boxes with small entrance slits (12 mm) and larger entrances (15 – 20 mm) will attract a range of microbat species.

Microbats prefer entrances that are only just big enough for them to squeeze though – as larger entrances are also likely to let predators inside.

The entrance to our first bat box is 20 mm and will appeal to larger microbats.

I’d like to make a couple of boxes with narrower entrances (as narrow as 12 mm) to attract smaller microbats too.

The smaller microbat species are more likely to feed on mosquitoes – whereas larger species feed on larger insects like moths. Improve the durability of your box by painting it with a natural waterproofing oil (we used linseed oil) or an exterior gloss acrylic in a camouflage green or brown colour.

Do not paint the landing pad. Putting a latch on the inspection lid is optional.

We have lace monitor lizards in our neighbourhood that would happily climb up a tree and open a box for a feed – so we put on a latch. Where to put your Microbat Box

Mount your bat box on a tree, pole or building – high enough to prevent vandalism and protect the bats from predators and floods.

At least 3-4 m above the ground is a good start. Choose a location with a clear flight path to the box.

If mounting on a tree, use coach screws rather than strapping – because over time a strap will strangle the tree, causing it to drop its limbs or die. Where to buy Australian-made bat boxes

Perhaps you would love a bat box – but don’t have the time to make your own?

Bat boxes can be purchased. But a word of caution – some commercially available bat boxes are simply ornamental and are not suitable as microbat roosts. Typical faults include being too small, not being made of durable timber or hardware, and having entrances that are too large.

From what I can tell from their websites – good bat boxes can be purchased from Latrobe University and Hollow log homes. Discover which microbats occur in your area

I was pleased to discover that 23 different microbat species have been recorded in my neighbourhood, including the tiny Little Forest Bat, the surprisingly cute (given its name) Little Mastiff-bat, and the chubby-looking Chocolate Wattled Bat.

A word of caution…

Do not touch or pick up a microbat! Microbats in Australia can host Lyssavirus – which can be transmitted to humans through bites or scratches.

And lastly, if you discover an injured microbat, contact WIRES or your local wildlife rescue service.

Best of luck encouraging microbats to your garden!

Thanks Tricia! This article was by Tricia Hogbin – Trying to tread lightly. Growing, foraging, simplifying & learning  how to be a creative contributor, rather than a consumer.

Wonderful idea! Just to elaborate on the final word of caution mentioned in this article: Lyssavirus is closely related to the classic Rabies virus, is potentially fatal in humans, and one type of bat Lyssavirus has been found across most of Australia. It’s thought to be transmitted by bites, scratches or splashes of infected blood or urine from an infected animal into a person’s eyes, mouth or nose. Immediate medical treatment is recommended for people who have been exposed. For more info, see: http://www.betterhealth.vic.gov.au/bhcv2/bhcarticles.nsf/pages/Lyssavirus

Thank you for the elaboration Rach. If we leave the microbats be – and don’t try and pick then up or touch them – then theres no chance of transmission.

also just a point that the single case identified in Australia was from a flying fox, not a microbat…

It has been identified in microbats. From the NSW Dept. Health: All mammals are susceptible to infection with rabies virus and are therefore possible reservoirs. Australia is currently free of rabies in terrestrial (land dwelling) mammals. However, evidence of Australian Bat Lyssavirus (ABLV) infection has been documented in several species of flying foxes (also known as fruit bats) and insectivorous microbats. It is assumed that all Australian bat species have the potential to carry and transmit ABLV. It is assumed that bats anywhere in the world have the potential to carry and transmit lyssaviruses. The only three known human cases… Read more »

great idea and How To article, thanks!!

This is great, however it’s best to avoid using any synthetic paints, glues or caulk because they’re likely to be toxic to the bats, who are very sensitive.

You had me at ‘they eat mosquitos’. *runs down to hardware store*

Hi Milkwood. I make quality nest boxes. I am located in Castlemaine. Could you please add my site to your list. http://www.wildlifenestboxes.com.au

-1
Reply
Go to Top
wpDiscuz
9
0
Would love your thoughts, please comment.x
()
x
| Reply
Bookings for our next class of Permaculture Living are open this week.
Join us!
Send this to a friend