The Power of Community: DVD Review 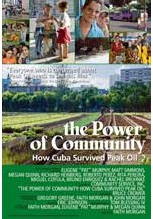 You would have to be living under a large, large rock to not have heard about the concept of Peak Oil. It’s scary stuff – much debated by many, scoffed by some, acknowledged as a player on the field by all. Something’s going on with the oil. Who can access it depends on who is friends with who this week, and it is something that all the major car companies are trying to prepare for (a sure sign that someone high up in their respective corporate structures is mighty tetchy about it). Down here at the ‘little ol’ me’ level, the implications of this sort of change is… unsettling, to say the least.

I must admit I went through a little bit of a stage last year where I was feeling quite overwhelmed by the implications of energy descent, as it is sometimes called. We flapped about, trying to figure out what, if anything, we could do. Should we be trying to live in the city or the country? Was living in a densely populated suburb a potential asset or a disadvantage in the event of a sharp change, or even a slow change, in energy descent?

This documentary was one of the first examples I saw last year of how an urban population with a relatively high standard of living dealt with a sharp drop-off in energy (in this case oil) supply… and it was inspiring stuff. Enter the republic of Cuba, during the Special Period (that’s the official term) in 1991…

The Power of Community – how Cuba survived Peak Oil describes how Cuba as a whole dealt with the end of the Cold War in 1991. In short, Cuba suddenly was without over half its normal oil imports and most (85%) of its international trade imports (read: basic commodities like food and other materials which, like the rest of us, Cuba mostly imported from somewhere else). The resulting panic and the prospect of a crumbling way of life was rather high on most Cuban’s minds at this point, obviously. Sort of like the flap I was in last year, but for real.

However. Enter necessity, invention and the concept of vitalism (the phenomena of many parts focusing on a common goal, which results in a more powerful outcome than the mere sum of the parts). Without going into too much detail (because I reckon, by hook or by crook, you should watch this doco), this example of a community brought together by a sharp energy descent is both fascinating and heartening. I watched this doco with a bunch of other people who were in a similarly freaked-out state of mind to me, and it did us all a world of good to see an example of ad-hoc, governmental and people-powered parts of a solution all coming together to make a viable, functioning alternative to the previous oil-based system that existed in Cuba. Probably because of the parallel implications for most western countries, like ours. 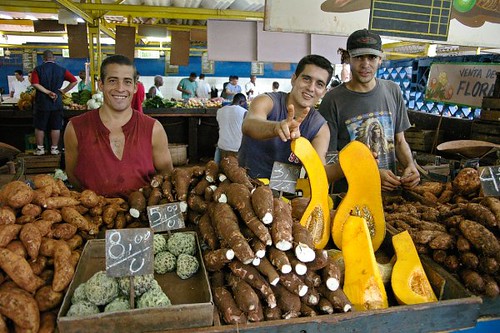 The doco has, i think, a good balance of interviews with many people who were involved in the damage-control, food management and re-building aspects of this alternative system, as well as a heap of ‘on the street’ type interviews, and a fair bit of archival footage alongside a huge amount of information and statistics. A good addition to any public or private DVD library, and a seminal piece which covers an epoch of Cuba’s history that relates to our own future in way which is probably more pertinent than it is comfortable. In particular, the public transport solutions must be seen to be believed, and the re-surgence of urban and community gardens are perhaps the best large-scale, modern example of growing food where you live, with its obvious and intricate benefits, that I’ve seen outlined in a documentary of this type.

If you’re after a copy, you can buy it from the Documentary’s website, or it’s also available on Amazon.com. Also, bits of it exist on YouTube , including an interview with the documentary’s director.