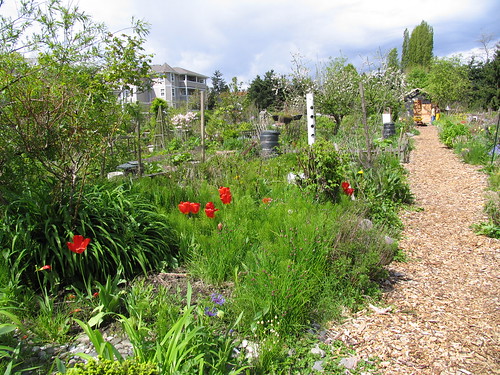 When I lived in the city, I always loved the idea of a microfarm. In my head, a microfarm was a plot of land with a footprint the size of a city terrace which was simultaneously blooming with flowers and vegetables, honking with geese, clucking with chickens and covered in trailing greenery and mulch. Someone drove a wheelbarrow through the plot, delivering hay to some minature cows while a small but sturdy windmill creaked overhead.

While this version of a microfarm might be only realisable in my head (or in duplo) and might seem a little idiotic, the real-life version of farming seems just as crazy these days, though its up the other end of the scale. The median size of an Australian farm which functions as a ‘primary producer’ is something like 700 acres. As opposed to my imagined 0.03 acres. Which means (leaving aside the delightful conversation we could have here about big agribusiness and the demise of the productive small farm) that any farm less than 700 acres is therefore a small(er) farm, and anything less than, say, 100 acres, would by today’s definition be getting into the micro.

Prior to the ‘green revolution’ in the 1940s-1950s, where small (sorry, micro) farmers were bought out by the new agribusiness boom that introduced us to industrial agricultural enterprises the size of a small country, with emissions to match, farms of 100 acres or less were downright common, and they existed nearby wherever there were people. Every major Australian city (and most towns, too) were all ringed by small farms and market gardens on the alluvial flats of various tributaries, which provided the bulk of the city’s fresh food. Nowadays, all those river flats are suburbs, and the bulk of our cities food comes from far, far away. Not good. Not good for us, not good for our communities, not good for our planet.

Enter the rise of the local food movement, and all the off-shoots of this timely concept, as a response to this scenario. Although, as I mentioned in the Edible Urban part 1, some parts of the world have retained their local food systems and back-door polycultures, and are henceforth not in the dire straights we terribly clever westerners find ourselves in today. But back to the solutions, not the problems.

At its best, local food means local jobs, better nutrition, (potentially) less emissions, opportunities for more cohesive communities and bioregional, seasonal produce that can help us keep in sync with the seasons and the natural systems around us. All of which clearly benefits everyone. Beyond that basic premise are variations such as the locavore movement, the 100-mile diet, the resurgence of the local farmer’s market, and other tasty options.

These ideas all re-iterate the importance of growing food where we live for our families and wider communities, and are seen by some as the the bedrock of food security on which we should all be building our futures. But can we really feed ourselves with local food systems? Really truly? The answer seems to be: We don’t know. Because we haven’t done it. Not yet. 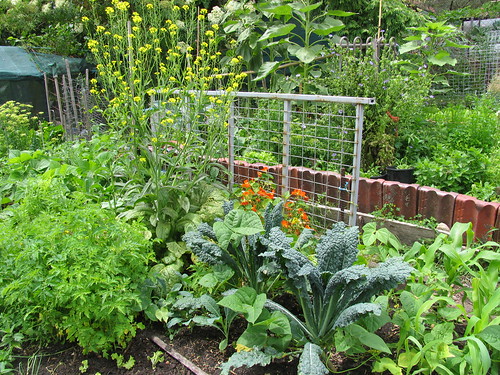 I have huge faith in human enterprise and necessity as the mother of all invention. I actually think our culture has incredible potential power in terms of truly stepping up to the local food challenge. Exactly what the future will look like in terms of our ongoing food supply, however, I don’t know. But here’s a couple of initiatives, strategies, pathways and players that I think are part of possible futures of local food:

Community Supported Agriculture (CSA): a CSA is a way of stabilising income for a local farmer, and ensuring a number of folks get a big box of local, fresh, seasonal vegies every week. In it’s classic and simplest form, a CSA scheme involves a bunch of people signing up to receive a box of vegies (or some other produce) every week from a farmer or group of farmers. The advantages of this kind of scheme include:

– the farmer knows ahead of time they have a market for their produce, and so can grow a wide variety of regional delights without having to worry that no-one will want their eggplant this season.

– the consumer gets a regular box of good food, produced locally, and also has some awareness of the steps between seed and plate, as the supply chain is drastically lessened. Hey, they might even get to know the farmer who grows their food. Imagine!

– the local economy is stimulated by the dollars paid for that box of vegies staying in the area and not being spread across a supply chain that involves 28 companies and fourteen countries (at least, if you shop at a major supermarket chain).

– because the supply chain is drastically shortened, that box of vegies has far less emissions attached to it. Even if it’s produced via conventional agriculture. And far less again if its produced with natural farming methods.

– because the farmer has a commitment of support from their immediate community, they are far less likely to feel compelled by market forces to go down the road of GM crops, weird hybrids grown only for long shelf life (and hang the nutrition), and high fertiliser inputs in order to meet ridiculous aesthetic standards imposed by major supermarket chains

– because the farmer knows they have a market for a variety of vegetables, that farm will therefore increase in diversity of plantlife and crops, which is far better than a large monoculture – better for the soil, better for the precious bee population, for seed sovereignty, and for food security in general.

In Australia, Food Connect has an exciting new CSA model with outposts in Brisbane, Sydney, Melbourne and Adelaide to date, and more in the works… very interesting example of effective social enterprise…

Walmart (insert Safeway here for OZ) as a ‘local food’ provider: Scary thought? Yes. Plausible? Perhaps also yes. Hmm. Aren’t all our local food systems meant to be cosy little small-scale enterprises? This article is really interesting because it succinctly explores the possibility for a corporation doing what successful corporations do: capitalizing on a groundswell, and doing a ruthlessly ‘efficient’ job, without the ethical basis. 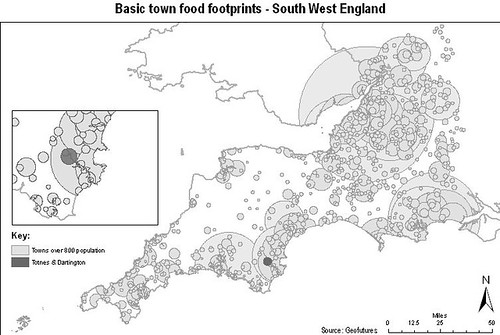 Can we actually feed ourselves?: Beyond all this touchy-feely plant-a-tomato and save the world stuff? On an individual level, there’s plenty of self-sufficient folks who can (slightly smugly) say yes. But on a community level? Um, no-one’s sure. So why don’t we know? Because we haven’t done the study, of course! But Totnes, a transition town in Britain has, and you can read the very interesting results here. Scoping out to national level (not ours, sadly), you can read the study of whether Britain can feed itself here.

Community Gardens: the new academies: Apart from being a resurgence of good fun, muddy shoes and fresh tomatoes, community gardens are incredibly essential for urbanised populations for all sorts of reasons: Knowledge transfer centre, seedbank, training ground, food larder, outpost of biodiversity… you name it, community gardens (potentially) cover it. The Australian Community Gardens Network is a great point of entry for getting involved. 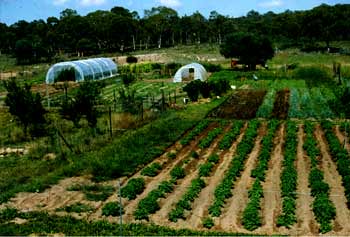 AllSun Farm. That would be the WHOLE farm. Not bad, eh?

Successful, existing microfarms: Believe it or not, they do exist. We recently visited an amazing example of microfarming in action near Canberra, in the form of AllSun Farm. Allsun has about 2000 square meters under intensive, natural farming cultivation. With the produce from this postage stamp they supply weekly CSA-style buckets of vegies to 15 local families, and two local restaraunts to boot. That’s an amazing amount of output for such a small area. Allsun are proof that we have much to learn about small-scale, intensive natural farming, and also that it can be done with minimal inputs, good land stewardship, and profitable, sustainable results.

I do still hold out hope stumbling across a microfarm in a terrace-sized plot, one of these days. I know there are various urban homesteaders here and there, and around western Sydney, at least, little market gardens (for greens, mostly) are popping up everywhere, and that examples like Allsun do exist, and could be replicated. So perhaps somewhere between the burgeoning kerbside planting revolution and the 100-mile foodshed lie possible solutions for us all, if we choose to activate them.