Why pasture cropping is such a Big Deal Grain cropping is something that, for the vast majority of us, is someone else’s problem. We just eat the results; certainly every day, and nearly with every meal. Bread, rice, corn, soy, beans and so on. Produced somewhere out there, by someone else.

So a portion of our every single meal is coming from a grain crop, somewhere way out west. We wish it were grown organically, and in a way that doesn’t destroy too much of our topsoil. But we’ll eat it regardless of the farming practices, really. It’s in our diet. It’s what we do. Normal cropping, even organic cropping, turns the soil over and lays it bare in the process of planting the grain. If you know anything about soil biology, carbon farming or even just permaculture, you’d know that destroying soil structure and leaving it bare is non-ideal, as far as the soil food web is concerned. Especially when done on an industrial scale.

So scope out and imagine, just for a second, all the soil in Australia that it takes to grow all the wheat and the spelt and the corn and the buckwheat and the whatever else you like in your bread or your muesli, for all the people in Australia. Add to that grain for animal feed, and all the other crops we produce. That’s a lot of bare soil. And most fields are cropped multiple times a year. That’s a lot times two. 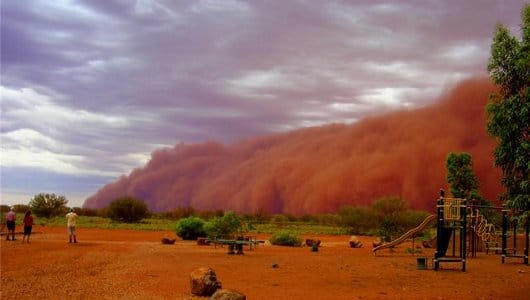 Duststorm in South Australia, 2009. Thousands of years of topsoil, up, up and away…

We’re all familiar with the figures concerning loss of topsoil, I’m sure: ‘”a University of Sydney study found recently soil is being lost in China 57 times faster than it can be replaced through natural processes; in Europe the figure is 17 times, in America 10 times while 5 times as much soil is being lost in Australia as can be replaced naturally.”

So we’re in front of America! Or at least not losing our topsoil at the fastest rate on earth? Well, no. Australia’s ancient landscape does not have the reserves of topsoil that other continents do. We’re actually in far deeper trouble than other continents…

Topsoil is the soil layer that is alive, or capable of being alive. It is humus, the bodies of dead soil life, and it is the living sponge that has the ability to feed our species by nurturing plants to produce food for us. Without topsoil, it’s all bad. Why this subject doesn’t come up in more tragic ballads is beyond me.

So you would think it would be logical if our mainstream agriculture, and our grain cropping in particular, were trying to move towards a model that retains topsoil. Or a model that maybe even creates topsoil! But you would be wrong. No such luck. Not yet.

Enter an extraordinary yet ordinary 4th generation farmer from Goolma, just the other side of Mudgee from Milkwood Farm: Colin Seis.

Col Seis has been ‘doing thing a bit differently’ on his farm ‘Winona’ for decades. About 15 years ago he started fiddling with an idea he had called pasture cropping – sowing crops directly into pasture, without first tilling the soil and turning it over. Harvesting pasture-cropped oats at Winona. You can see the greeen of the perennial pasture in between the brown of the oat stalks. Now this is groundcover!

Pasture cropping relies on many factors to work, including timing and good forethought, but in a nutshell it allows cereal crops to be sown directly into perennial native pastures and have them grow in symbiosis with the pasture, for the benefit of both the pasture, and the crop.

This process has the effect of producing a very respectable yield from a field (as good, if not better, than conventional cropping, in terms of profit to the farmer), while retaining perennial pasture (which is also a big deal). And, perhaps even more importantly, pasture cropping preserves the soil structure, builds biomass and results in no loss of topsoil. An unheard-of approach to cropping within modern agriculture. Which is why pasture cropping is such a big deal.

But there’s more to it than just cropping. Introduce some herbivores to that same paddock, after the crop has been harvested, and the nutrient cycle really starts to get interesting. By using Holistic Management techniques of herbivores like cattle or sheep, the biomass and available nutrients of that pasture builds even faster. Which means the topsoil, in turn, also builds at a rapid rate. Anything that actually builds topsoil (and there’s not many agricultural systems that do) is sequestering carbon. Meaning pasture cropping is, on top of everything else, a carbon sink technique. Which is in marked contrast to agriculture as we know it.

So, to summarize hugely on what is a complex and exciting subject; pasture cropping builds topsoil while simultaneously producing a grain crop, improving a perennial pasture and also feeding up some livestock and sequestering carbon while the system is at it. Not bad for one paddock! Examining some of the native perennial pastures beneath the oat crop

It’s estimated that there are now thousands of farmers across Australia and beyond either trialling or doing pasture cropping, as the results and benefits speak for themselves.

In the last three months we’ve been to Col’s place twice, and we’re going again this weekend. This is because every time we have a teacher from the Regenerative Agriculture Workshop Series in town, they are champing at the bit to see Col’s setup. First it was Kirk Gadzia, an esteemed Holistic Management practitioner from the states, and recently Darren Doherty from Bendigo. And what does Joel Salatin want to do on his one day off with us before flying home to Virginia? He wants to go to Col Seis’s place, of course, to see what is possibly the origin of modern regenerative cereal cropping. And we can’t wait to take him.

Note – January 2011: We did take Joel Salatin to Col Seis’s farm, and it was something else – both Joel ad Col were so excited by the others techniques they nearly hyperventilated. Lots of brainstorming new successional animal/cropping systems (free-range pigs foraging on oat crop, free range chooks following pigs, then another sowing of grain, etc). You can see a couple of pictures of the visit here in our post on Joel Salatin’s visit.

Nice work!
I remember there was a good landline episode from last year based on the work of Dr Christine Jones (I might have the name wrong) who’s work was based on increasing soil carbon through pasture cropping.
I remember reading all her publications at the time with plenty of photos and diagrams showing root structures and mycilium(sp?) etc.

Thanks, Michael! Yes Dr Christine Jones is a national treasure and a good friend of Col’s. Her website is full of important info: http://www.amazingcarbon.com

Attended a workshop run by Colin and Christine Jones in Central Vic a few months ago. Fantastic.
At the time I was at the start of my PDC so it was quite a poignant time to learn about this fantastic system and approach to farming.

This is really brilliant! Thank you for documenting this. How does he sow the cereal’s seed? A Keyline or subsoil plow? America’s in need!

Mark have a look at what the Land Institute are doing in the US with perennial cropping: http://www.landinstitute.org/vnews/display.v/ART/2007/03/15/45faa0bbd5065
Not quite the same thing but along complimentary lines, i think…

Mate you are the lyrical master…great reading for everyone! Should send this baby to PRI for even more people to read and understand the BIG DEAL ….brilliant…

thanks for the excellent explanation! Makes complete sense…..hope the practice gets taken up much more broadly.

So I’m assuming he’s nudged the native pasture towards shorter grasses? I’m guessing that if there are any very tall native grasses (I don’t know if there are in his parts) that they’d grow up through the grains and make that whole broad-scale harvesting thing very difficult.

it is not so much that as he grazes it short at a time when the native grasses present are not in a rapid growth phase. Timing is everything.

Great introduction to the topic, thank you.

Wondering how pasture cropping with a disc seeder would go in cracking clay soils withperenials like blue grass and Mitchell?

Heya Angus – yep we have seen folks direct sow with disc seeder at a pinch – it does tear up the ground a bit more so you may get competition from weeds as a result of that disturbance, but if that
s all you’ve got, it can work?