When it comes to learning market gardening from the experts, we think Michael and Joyce from Allsun Farm are up there with the best.

They walked us through setting up our original market garden at the old Milkwood property in Mudgee many years ago, and farm seasonal vegetables at their thriving productive property in Gundaroo, NSW.

They’re also tool mad. Joyce says, “Basically when you work like we do you just have to have the right tool for the job.”

A so with that belief in hand they also started their other business, Gundaroo Tillers, selling the best selection of tools from around the globe.

So it was only fitting that, following on from Michael Hewins’ top 5 tools, we check in on the ‘Allsun Five’… Michael: “My favourite tool for the market gardener is the broadfork. When I first read Eliot Coleman’s ‘The New Organic Grower’ in I think 1991 or 1992, I realised that I had never seen a broadfork, and I also knew from talking to Eliot that there were only two people in the world that made them.

One in California and one in France, and his advice to me was, ‘don’t talk to either of them, they’re both cranky old men and they don’t want to make them in any sort of quantity’.

So I got together with an engineering friend of mine and we decided we would make a couple of broadforks.

Their function is really that they are a non-inversion, aerating tool. They open up the soil, but doesn’t turn it over, they let the air and water into the soil, and encourage the biological life in the soil, which in the top few inches consist mainly of aerobic organisms that function to increase one’s fertility.

We have used them here on the farm ever since.

Every one of our 102 beds is gone over with a broadfork at least once a year, and we have increased our fertility and top soil from about less than 25mm – the soils here were heavy clays with very little real top soil – and we now have in excess of 300mm of great topsoil.”

You can read more about how these broadforks work on our blog here. 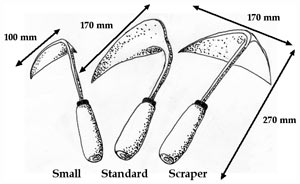 Joyce: “My favourite hand tool is definitely a ho-mi. We have them in three shapes, they’re a very old traditional hand-forged Korean implement. They’re something that has evolved.

Basically they’re a hand tool with a flat head and they go into a little wooden handle but the shape of them has not been consistent throughout the last few hundred years, and these days we use three of them.

One with a shape a bit like a disk plough, one with a shape that’s just a triangle, and then there’s a little tiny one that has a Japanese equivalent which is made in steel but is not forged.

I think the thing I like about them is that unlike all the other hand tools you can buy which put an awful lot of pressure on your wrist when you’re using them, the shape of them means that you use them from your shoulder right through all of the muscles in your arm.

So I use them for everything that I do on my hands and knees, from weeding, to transplanting through to poking around in pots.

Anything where you’re on the ground can be done with a ho-mi and I just love them. As an all-round hand tool in a backyard vegetable garden or even a market garden they’re just indispensable.” Joyce: “Because our garden is a market garden, once you get over a certain size you need a tool that covers the ground and just gets the work done fast. And that’s a wheel hoe.

It’s a tool that has all the hand equivalents that are just a tool on a stick, but once you put a wheel in front of you and two handles to push…

You can put a whole range of tools on it, it’s not a single tool, it’s a system that bolts on and off a whole lot of tools like a mini tractor.

And it’s just amazing, you can do huge areas particularly if they’re on the flat, and we’ve got a lot of area on the flat these days. You can weed them at the speed of light.

It was a complete breakthrough having a wheel hoe because the efficiency in market gardening just changes hugely.

We plant potatoes with it, so we put a furrower on it and run the furrow, we run it for other things too.

But its real use around here is weeding, and we put an oscillating stirrup hoe on the bottom of it and that shaves the weeds off just under the soil and you run it backwards and forwards.

So every single path on the place gets wheel hoed on a regular basis, once every two weeks.

Even if you can’t see the weeds, if you go over it with a tool like this once every ten days you just won’t have weeds. And they’re one of the biggest killers in market gardening.

If you get bogged down in weeds it’s just so much effort to pull yourself back up from that.” 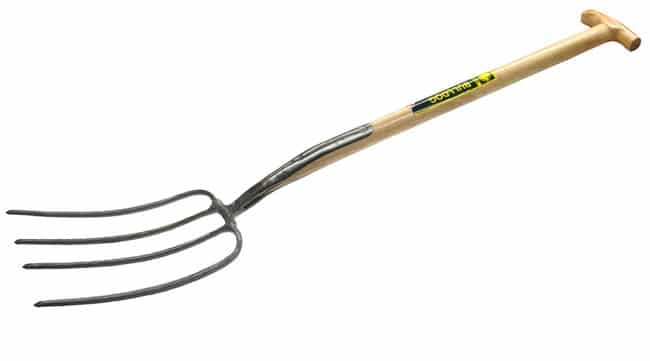 Michael: “Another favourite tool out here is what is called a manure fork. It’s a very light but strong tined fork which is extraordinarily useful for moving any kind of organic matter, for moving mulch, for turning compost, for carrying green waste, piles of weeds and things like that to the compost heap.

They’re not very commonly available, in fact we originally had to source ours from the United Kingdom, a wonderfully old tool company there called Bulldog Tools, that makes beautiful manure forks that are light and easy to use.

They can pick up a really nice big pile of stuff, they’re nicely balanced, and can carry it to wherever you’re making compost or whatever.” Joyce: “I have to say, we’ve been direct seeding for a long time now using all sorts of seeders, and all of them have had issues.

And three or four years ago we came across a Korean seeder that’s hugely high tech and gear driven. You can manually set the drive gears inside the chain, that chain drives the shaft which turns a roller, and they make all these different rollers.

So you can precision seed from something as fine as a turnip seed to green manures and corn. It won’t do really big things like maize or broad beans but as an overall precision seeding tool it’s amazing.

It just works. It does everything.

You can control the depth, it covers the seed up afterwards, it can plant anything from about 20mm up to about 500mm in spacing. And you can drop exactly what you want, whether one seed at a time, two seeds at a time, and providing the seed is consistent it just does a very accurate job.

And the thing about it is, when you’re on the bigger scale of things it is expensive, and thinning is in terms of time, and weeding is expensive if you don’t get your lines straight.

So it’s something that saves time and money and it really is remarkable, and three cheers to the Koreans for coming up with it, because all the complaints that people like us have had over the years they have addressed and put into a quite a reasonably priced and amazing tool.”

Joyce and Mike run both an organic market garden and a toolshop from Allsun Farm. The tool shop grew out of them finding it difficult to find good quality hand tools for mirco farming in Australia.

So they started getting in what they needed from all over the world, from countries with a living tradition of non-industrial, hand tool farming.

And so the tool shop was born.

All items are those which are actively used at Allsun Farm, which is a pretty good indication of their relevance for Australian soils, energy inputs and appropriateness for the Australian growing context.

The Gundaroo Tiller (aka the Allsun tool shop) is here.