Given how locked-up our city real estate is, many new farmers are thinking between the spaces. Is farming on small-plot, rented land possible in an urban context?

Today we’re talking to Canadian micro-farmer Curtis Stone, otherwise known as ‘The Urban Farmer’, about how to do just that.

Curtis runs his growing enterprise Green City Acres across 5 plots in downtown Kewlona, CA. He has much to share. Tell us about how you secured your first lease for a growing space?

It was from a long time friend’s family. They owned these two houses that were next door to each other in the downtown. The combined lot size was half an acre. One of the house had burned down a few years previous and was more less just an empty lot.

It had fallen into disrepair as the family didn’t have time to keep up the property. When they heard about what I was wanting to do, they saw it as a win win opportunity. I needed a place to farm, and they needed someone to look after the property. 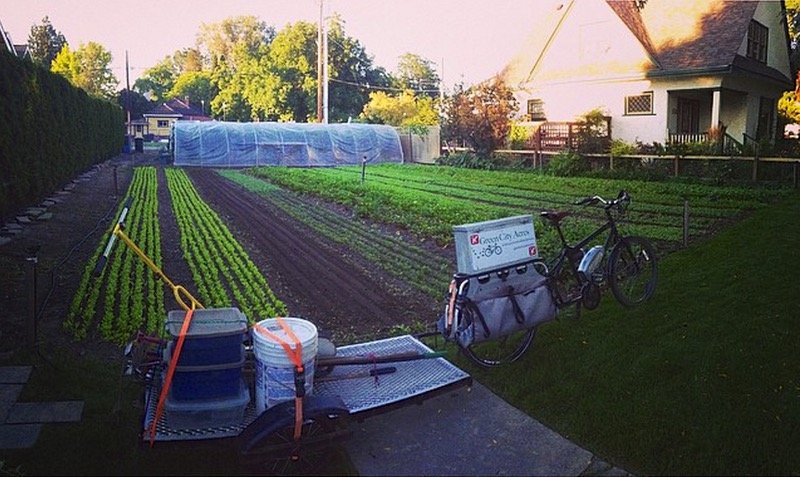 Since then, how many plots are you running to make up the enterprise that is Green City Acres?

We are farming on one third of an acre which is comprised of 5 plots.

All of the plots are front and back yards in other peoples homes, except one lot is just bare land and another plot is my home base where I live. The lot is a quarter acre.

We run the operation from my home and also have 2 18’x50′ greenhouse. We’re installing a passive solar greenhouse this October. All the plots are all within 1.5 miles of each other. 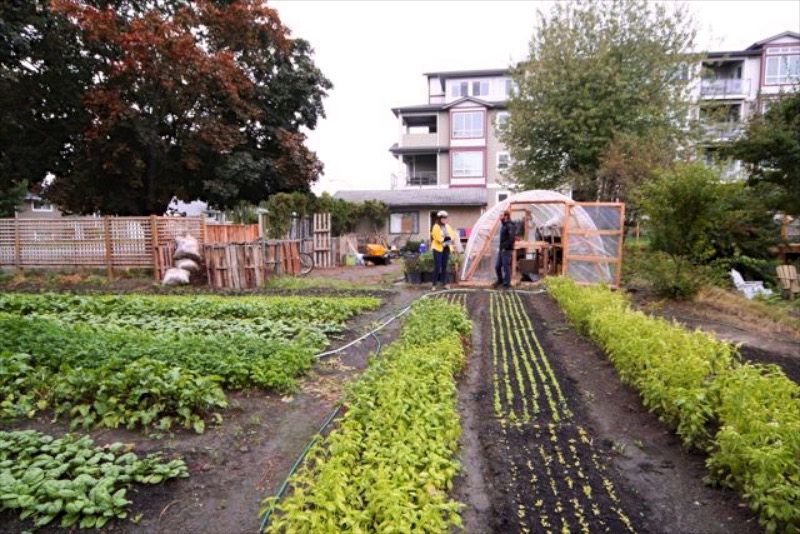 What sort of lease arrangements do you have for your rented plots?

I only have one formal lease agreement for my farm. It’s for the lot of land that is just bare. All the other plots I have simple MOU’s in place and they are not legally binding. Simple one page documents.

What do you see as the main advantages to renting small-plot land to grow?

The biggest advantage is market access. The fact that I’m in the city and hundreds of people walk by my plots every day. We never have a problem selling our produce.

The other is decentralization, which mitigates risk. If you don’t own the land, even in a lease, it’s possible to lose it, but is also protects you from other factors.

Multiple micro climates gives a diversity of growing climates. In 2013, we had a freak hail storm that decimated a 2 acre site we were leasing. $30,000 of crop damage in 30 minutes.

At the same time, not a single one of our urban plots were affected. Another advantage of having small plots is that there is less to manage, which allows you to focus on the micro detail and never let things get out of hand such as unmaintained areas that will blow weed seeds all over.

Perhaps the best two advantages are the heat island effect, which gives us an average of 5c warmer temperatures because of the city warmth. Not so relevant in Australia!

The other is weed protecting. In small plots in a city you have considerably less weed pressure, because there is far less area for weed seeds to blow in from. All the buildings and physical obstructions that surround you stop weed seeds from blowing in. 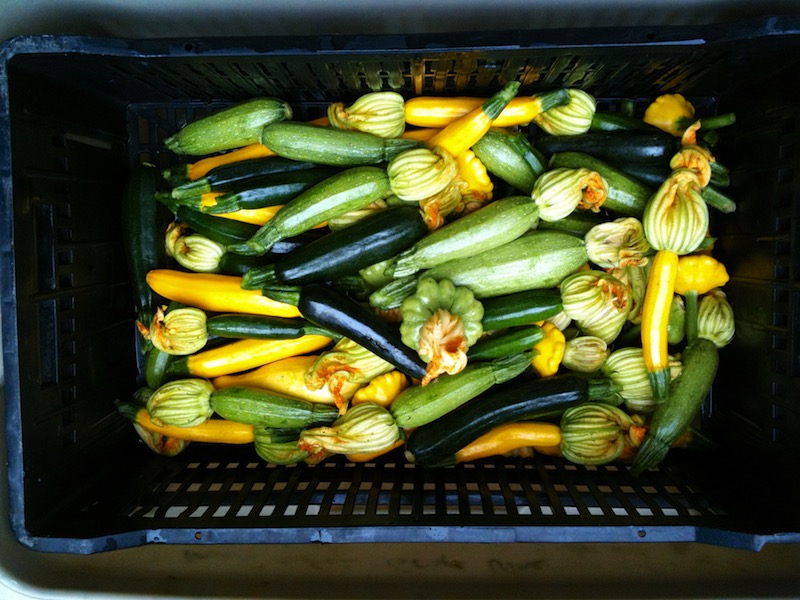 What would you say to the concern that, in a rented land situation, all your soil improvement work and investment (both in time, energy and cold hard cash) might be for nothing if the lease gets cut short?

It’s a marginal cost of doing business. When you look at the profit margins that one can pull off a 5000 square foot site, a $1000 investment in soil and compost for a $30,000 gross return is a modest expense.

However, this is why, if I were to farm on a site that required a soil major soil remediation, I would be looking at a 5-10 year proper lease agreement.

I have a site that is an example of exactly this. It’s a 5000 square foot empty lot. The soil wasn’t contaminated, but it was just basically builders rubble. Gravel and dirt.

I spent $1000 on new soil and good compost for the beds, and we spent a winter raking and picking out rocks. The site now grosses $30,000 in a 7 month season. It’s a Hi-rotation site producing what I refer to as Quick crops.

Each 30″x50′ bed will see 4 crop rotations, and the greenhouses will have 3. One tomato season with crops on the shoulder seasons of spring and fall.

But for the most part, this is why I don’t take on sites that need too much work, especially early in my career. When converting an average lawn site of 2000 square feet, you’re looking at some basic soil amendments like some compost and an organic fertilizer.

Overall, it’s a $200 cost at best. If you’re converting a brown field or building on hard scape, that’s something entirely different, and I would advise people not to go that road unless they have a long term commitment. 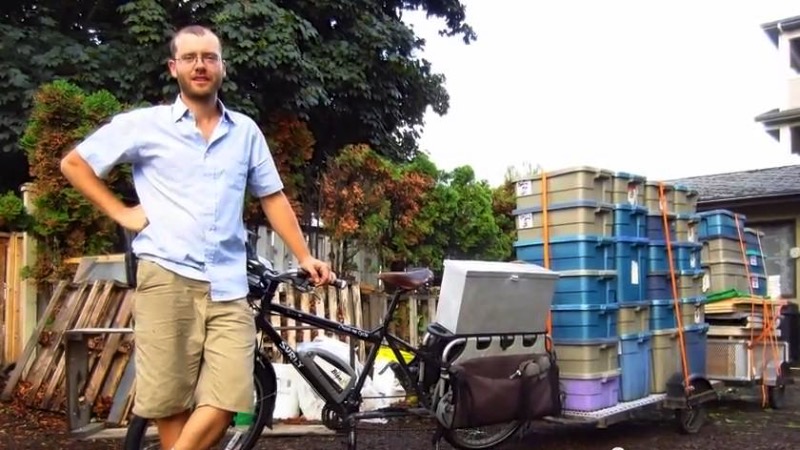 Proximity to market is a key element for your growing enterprise – how far out would you go, when it comes to distance between available growing plot, and where you’re delivering/selling the produce to?

There’s many variables there. Distance between farm sites depend on the average lot size. If you’re in a larger size city, you may have a lot of small lots, and if that’s the case, you’d need them to have close proximity to each other, because a lot of time could be lost in transit.

In medium to smaller cities, it’s easier to find larger lots, and in those cases, travelling a few miles between sites that were 2000 square feet or more, wouldn’t be as big of a deal.

As far as markets are concerned, it all depends on what kind of numbers you’re pulling from those market streams. An hour drive to move a couple thousand dollars of product can be just fine.

But an hour drive to sell a couple hundred dollars would be a losing scenario for the farmer. It all depends on a farmers own circumstances. How replicable do you see your model (or a adapted variation thereof) as being for other cities in other countries, assuming land is available? Do you think the buying habits and general demographic of your town is a large factor of why your model works?

From what I have seen over the last 6 years, the buying habits and food trends are almost the same all over the first world countries.

There are always going to be slight variations from place to place, but generally, they are all on the same growth patterns for interest in small organic farms and local products.

The model is very replicable from a marketing and production standpoint in most of Europe, Australia New Zealand, Canada, and the USA. The production model is replicable anywhere. What’s the first three resources you would point someone considering urban farming on rented land at, for further research?

Here’s a virtual tour of my farming operation to start with!

This is the first of a series of articles we’ll be doing about rented land farming. Many thanks, Curtis.

Photo credits: Katie Huisman for the 1st + 7th photo, all others via Green City Acres.

This is great to see such initiative. Thank you Curtis for sharing your experiences.

I have been struggling to buy decent land but Ive just connected with an old lady in Bangolow NSW who had 3 acres unused. She lets me grow vegetables in return for some produce. Its a brilliant relationship. In one month I have 300 sq m underway. Using my Milkwood Market Garden Course knowledge finally. The land owner knows even if I leave one day her soil will be better than when we started so its an easy win / win situation.

Wow, I wish we could find someone to take over the 3acre pasture! Way too much grass to cut and getting too old to try and keep up with it all! Land is so much cheaper here in Florida and just no interest from anyone looking to help out!

Get some sheep, goats, chickens or even cows!

We have chickens already, 15 of the fluff balls, but no cows or goats. Just not enough time to take care of it all

What area of Florida?

Zephyrhills which is just north of Tampa. We have five acres but one is woods and the side pasture is just huge! We have chickens but not enough time to do much more.

Hi Lisa, I am currently looking at land to micro-farm in this fashion around Port Richey and Tampa. We are in the process of moving to Port Richey from NH in the next month. If you are still looking for someone to help with the land please email me at [email protected], I would love to discuss my background and what you were looking for in more detail.

0
Reply
Go to Top
wpDiscuz
9
0
Would love your thoughts, please comment.x
()
x
| Reply
Bookings for our next class of Permaculture Living are open this week.
Join us!
Send this to a friend