Tinyhouse build: we WILL be in by Spring There’s nothing like a good old deadline to fire things up and move a building project along. A hard deadline, that is. Our first deadline, the birth of our child, didn’t seem to work as impetus. But this time, we mean it. And we’re going to make it.

And so i make my pledge to you: we will be into our tinyhouse by Spring. I’m going to do a weekly countdown post on the house from here on in. Starting at 5 weeks out.

Our hard deadline for moving into our tinyhouse, the oh-my-god-if-we’re-not-in-by-spring-let’s call-it-quits deadline, is fast approaching. We. will. be. in. the. house. by. then.

So place your bets and take your wagers if you must, but my fingers are crossed.

Whew. Now that I’ve made that call, and we’re now kind of nearly there, I feel more comfortable taking a quick glance back at what has gone before… December 2007: our pleasant virgin hillside, back in the days when we lived in a tiny caravan and thought it would all be done by next Christmas. December 2007: first step - build a dam next to the house site, and cut a shelf to build on November 2008: forming up for the slab of the passive-solar cottage November 2009: some uprights uprighted! And the formwork for an outside staircase so we can get around the building site without constant boulder-clambering August 2010: big, big rains. We stop to fix the earthworks, which are barely holding up under the strain of all this unusual water... May 2011: look at that gabion wall! So happy. No small thing, to stabilise such a big cut into a hill in DIY world... May 2011: windows and stabilising cladding to go with the wattle-and-daub walls 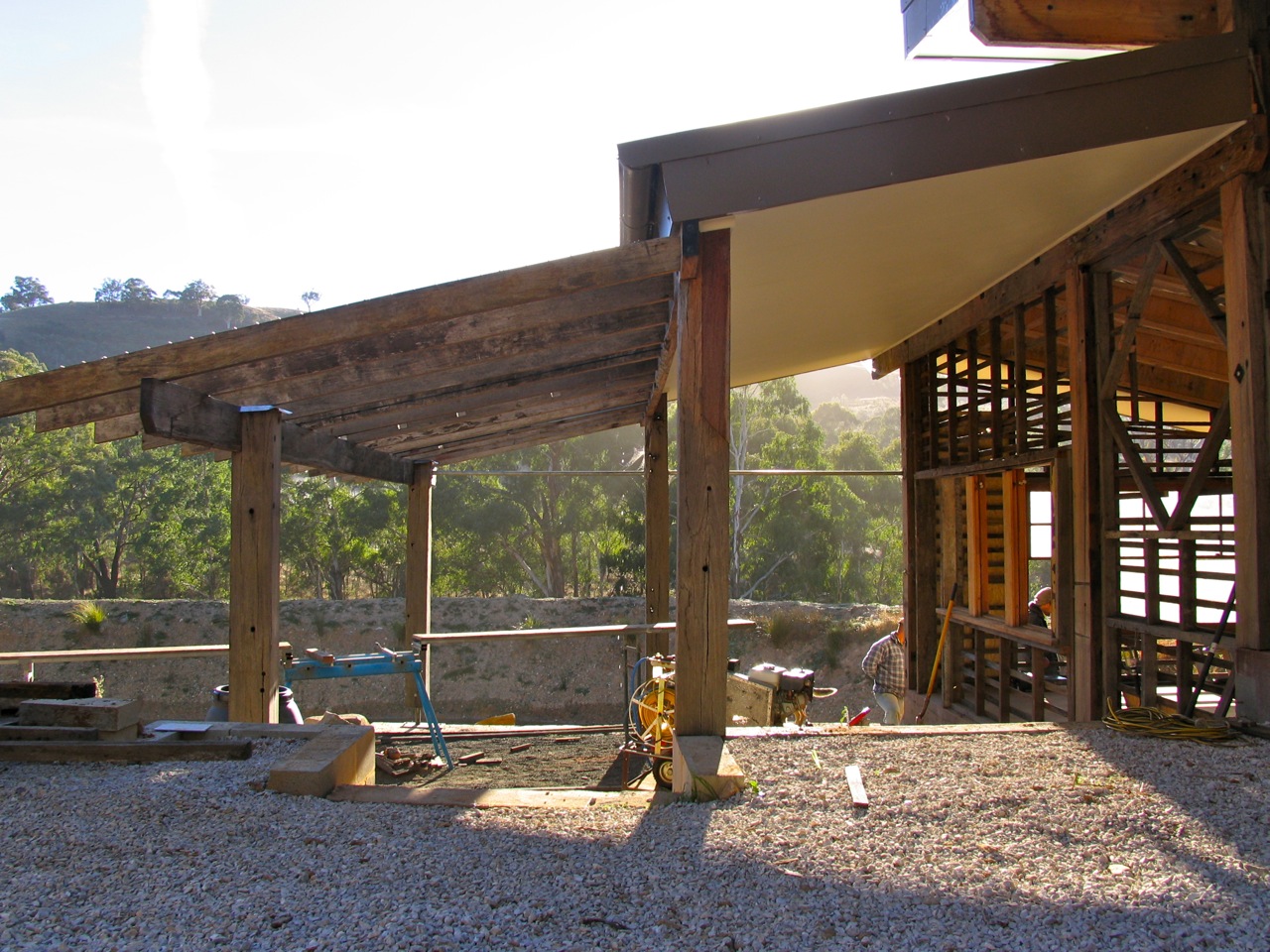 May 2011: and even a courtyard taking shape July 2011: it's starting to look like something. We begin to belive... July 2011: stuffing the earthwool insulation in between the wattles July 2011: Adam Kennedy, awesome earthwool stufferer, confirms that both he and the walls are stuffed.

All we have to do now is…

…finish the fiddly gutter bits, render the outside in lime and the inside in clay, design and implement a simple greywater and blackwater system, finish the bathroom, design, construct and install a small lovable-loo esque compost toilet, install a wall bed, make a staircase, install a woodfired stove…

…create a kitchen from found bits, make shelves, install and connect the solar power system, do all the electrics, ping wireless internet over the hill from the woolshed and a couple of other trifles, and we’re there…

So what do you think? Are we dreaming? Is it possible?

Many thanks to Shane Mills, Trev Bamford, Damien Stephenson, Ian Todd, Adam Kennedy and many others for their help thus far. And if you’re willing and able, the answer is yes.

New Milkwood Video: What We’re All About
February 3, 2016

oh how gorgeous! – it will be worth it when you are finally in (fingers crossed that is this spring!) 23 years ago I moved into my rickety old house…… it took me 14 years (and a first pregnancy) to begin to fix it (ummmm it was missing things like windows…. walls….. and most other things that would classify it as a ‘house’……. funny how the impending arrival of an itty-bitty being is a spur to ‘fix’ things) we missed our deadline (which was the birth of the itty-bitty being) but not by too much…… ahhhhhh how much more do… Read more »

Wishing you every success in a timely completion of this fantastic project. My father built the house I grew up in, (with the help of his friends) and no, it wasn’t quite finished inside when we moved in, but who cared!

you guys are brilliant and inspirational in so many ways! and when it is done you’ll feel such a sense of satisfaction …. and then no doubt you’ll be on to the next project!

Our house is not disimilar to yours in many ways, ut was also started at the same time, gone up at about the same pace and is also nearing completion. We are aiming for Christmas lunch in the completed building. Good luck with yours, i know what a huge effort it is but you have done a spectacular job so far and should be really proud.

thanks Steve – race ya?

We are only just a year into our owner builder journey. Good luck with the deadline, spring is not far away, but I suppose its all relative to how much time you have to spend on it between now and then. (btw is spring the 1st Sept or the equinox???? – go with the equinox!!!!). We are hoping to have a roof (and maybe a slab) by the end of the year – probably not likely as both of these are so expensive. Really interested in your wool insulation, going to look it up, we are doing strawbale, but need… Read more »

oooh we might be using that equinox caveat! Thanks for the tip 🙂

It’s looking great. We are also saving for renovations. When I say saving, we are collecting hardwood to build a deck (from tip visits) and collecting kitchen units from “council clean ups” for our kitchen re-fit.

This looks wonderful – best of luck on finishing up!

What? Only 5 weeks until Spring! Winter must’ve flown past this year I tell ya! A lot can happen in 5 weeks though. Especially if you’re organised. 😉 In so many ways, we were spared the dramas you guys went through, going through a builder to get our house up. However (and so terribly ironic too) we were left with the same difficult earthworks/landscaping dramas you guys are dealing with. It’s probably taken us as long on our landscaping projects, as it has taken you to reach the point you’re almost moving in. We simply had to do a lot… Read more »

ah we thrive on drama, it seems. Or if not, we’ve adapted…

I would love to see the plans/layout of your house. You guys are inspirational! Cheers Julie

Thankyou! and you can have a squiz at the basic plans here Julie: https://www.milkwood.net/2010/05/03/milkwood_tinyhouse_floorplan

You will nail it!