We’re doing some serious (for us) tomato growing this year. And it’s all been going pretty well. We’ve figured out how to trellis those varieties that need it, kept the compost and biofertilizer up to them, and defended them from the dreaded 28 spot ladybeetles.

So just as the romas were all ripening in quantity (despite this crazily wet and cold summer), nature decided to ensure we didn’t get too smug about our first year of community scale food growing. Her solution? One big fat hailstorm in the middle of the night, right over Milkwood Farm. The next morning we woke up to find the market garden somewhat rearranged, and drifts of hail everywhere, slowly melting in the morning sun. Everything in the garden was shredded. Some of the green manures had conveniently self-mulched (gotta look at the upside)…

The tomatoes were not looking good. The top canopy of the Roma tomatoes had the leaves all stripped off them, the trellis tomatoes were full of pock-marks, and the cherry tomatoes were thick on the ground.

So we had a little freak-out, and then I went and called Joyce from Allsun Farm for advice. I felt this was not a time to get creative with solutions. It was a time to find out what the heck to do, from someone who had done it before.

Joyce suggested the following ideas, which I’ve listed below in case anyone else is ever in need of reasonable ideas for their tomato crop post-hailstorm:

The problem with hail-damaged tomatoes is (apart from the obvious bruising)  the breaks in the skin caused by the hail damage. Broken skin means an opening for fruit fly and a bunch of other critters to get in, and you may find you quickly have a major problem on your hands if you leave damaged fruit on the vines.

And so we harvested all the hail-damaged fruit we could find. That took quite some time. Then we further opened up the canopy in the romas by snipping a path through the middle of them, to let in extra light and air, and to make the whole patch more manageable. Our gorgeous heritage tomatoes, sadly picked before their time... 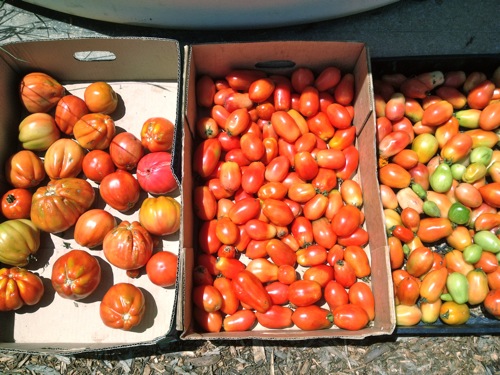 Green tomatoes that probably won't ripen. Optimistically placed in the sun while they await their fate as pickles and chutney

The ripe or nearly ripe fruit we turned into passata or roasted tomatoes. The half-ripe fruit we put outside in big boxes to ripen, and for the most part it all ripened up in a couple of days.

So that was over a week ago now. The market garden is now looking a little better, but it’s clearly been through the wars. Harvesting 8 days later... still a bit of hail damage coming through, but we don't mind, it all tastes amazing... We still have tomatoes ripening, though I suspect we’re losing more fruit to rot than we would be if the hailstorm hadn’t come through.

So yes. We’re living and learning. And when in doubt, we’re pickling… Ashar showing off his favourite hailstone. At least someone was happy about the hailstorm!

Aww. I tied some of those up. I feel your pain. Lovely pickles tho’ and Ashar – that’s an ace hailstone. Keep yer chin up.

Heartbreaking when a potential harvest is affected like this, may the crop continue to recover.

Oh no! Sorry to see your hail damage. Hasn’t it been crazy weather? Another storm is forecast up here again tonight – I can hear the thunder and see the lightning now!

hi kirsten and crew. greetings from a very hot tassie. so sorry about your tom crop. what an amazing yield still though! i see rose is sill working her miracles! it is fantastic to see the production coming through the OMG since the early days last september. thanks so much for your blogs. i enjoy them very much. a question….what is the name of the irrigation line you used in the OMG please? i haven’t been able to find anything like it over here. much love to you all

Hey kirsten, sad to see your hail damage (we had some to!) but it looks like you escaped pretty well 🙂

I wanted to ask how you defended against 28 spotted lady beetle?

I have them on my zucchinis and cant seem to find much on the net about what eats them if anything. Im sure i could use a spray (garlic/chili etc) but im sure there would have to be a companion plant out there or something that will do a better job. Besides we have had so much rain here it (spray) wouldn’t last 5 seconds..

PLEASE, PLEASE, PLEASE ROSE!! pretty please share a green tomato pickle recipe that looks like a carnival of fun in a jar??

Hello World – Stephen the OMG here….. ! Just to reply to some of the comments above – but first…. I am happy to report that we have good recovery from the hail-storm and very little damage or fruit loss – indeed, to date (29 Feb) we have reaped a total of 361.5kg Tomatoes (across all our varieties) – of which Roma wins at 176kg – more than double any other variety. The hail shredded leaves and striipped off all the flowers but only pitted/scarred the fruit – the scars turn yellow/white but this does not affect the sweetness nor… Read more »