Australian native stingless bees are similar to european honeybees in many ways, but they’re also very different, too.

This week I was lucky enough to attend a harvest and a hive split of these amazing social insects, in a inner-city backyard in Sydney… Bees on film – the hive awaits its harvest, atop the chicken coop out back of the Sustainable House in Chippendale.

Firstly, the honey harvest, from hive 1. The top box of the hive is open. This is the ‘sugarbag’ section, where the bees store their honey and pollen.

The second box down has a semi-ceiling, which restricts the brood comb to the lower boxes.

This allows for occasional harvest of the sugarbag above, and also better facilitates splitting the hive, to increase the number of tetragonula colonies. A good harvest from a healthy hive. Tim is happy. The tetragonula bees are understandably agitated by their hive being temporarily opened, and tend to fly around at this point, getting in one’s eyes and nose… Tim shows a pollen deposit, a conglomerate of thousands of flowers, collected from the city over the past 4 years… Harvest time. Tim’s tool to break up the sugarbag, so the honey can be drained. Flip the box over a tray, and out drains the honey. The honey is sieved to remove large pollen and waxy bits, and dead bees A very happy Michael, with his first proper sugarbag honey harvest in 4 years… The tetragonula honey is much more liquid than apis mellifera (european honeybee) honey… being about 70% water, as opposed to 15% for the normal honey you would buy or harvest.

A rare treat. It tasted sweet, and strange, and  tangy. The memories of millions of flowers, all in a mouthful. Tim also harvested some remnant sugarbag off the roof of the brood box – each ‘sugarbag’ is a small pot of honey or pollen filled resin, about the diameter of your thumbnail. 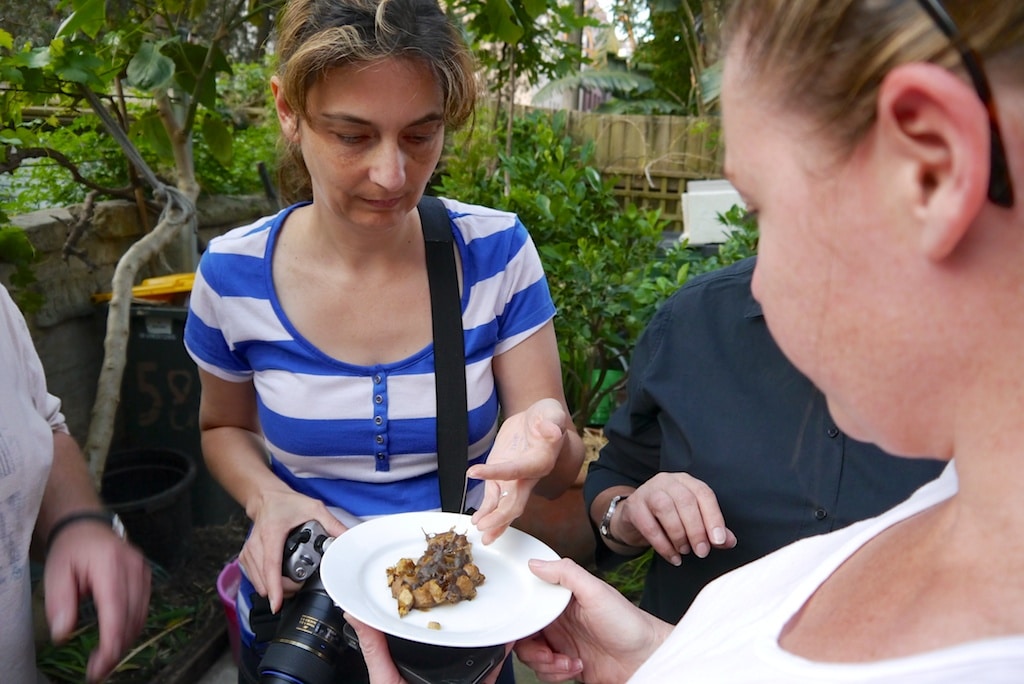 Next up, it was time to split one tetragonula hive into two.

This process involves splitting the brood chamber of a healthy hive, and creating two hives as a result.

One hive will retain the queen bee, and will carry on as before.

European honeybees rear their own new queen, when needed, from fertilised eggs by feeding royal jelly to certain baby bees. Not so with tetragonula, however.

The tetragonula  bees are different – members of this new hive without a queen will actually go and get a new virgin queen, and escort her home to be lady of the manor, so to speak. Tim splits the hive down the middle of the brood box. Taking a peek at the upper half of the brood box… The lower half of the brood chamber, showing tetragonula’s amazing spiral brood comb formation. The knife points out the brood comb, while around that part you can see more sugarbags of honey and pollen… Above and below – the two halves of the brood chamber. Tim Heard and his right hand man Tony prepare to place an empty second box on the newly split hive, for the brood comb to grow up into. Placing some sugarbag on the ceiling of the new brood box The lid to the new brood chamber is on Strapping up time. The hive is now split, and will grow over the warmer months to be of a similar size to what it was previously.

The other half of the hive is in a similar box, on its way to a new backyard to increase pollination, diversity and species resilience.

You can learn more about Tetragonula bees at Tim Hear’s website www.Sugarbag.net which has extensive resources on these fascinating garden companions.

Big thanks to Michael Mobbs of the Sustainable House for sharing the experience of his honey harvest and hive splitting with us all! Really fascinating, thanks for sharing this with us.

Really cool! Thankyou and look forward to opportunity of attending a short course!

Thankyou and I’m seriously considering getting into honey as a complimentary product here at our small 100 tree olive grove. I Like the stingless bee idea but this hive looks YUKKY ! LOL, and I’m not loving the look of that varierty of honey even once sieved…do regular hives look like this inside ?? Can you steer me into the direction of resources for other varieties ? Thanks xoxo LOVE YOUR WORK !!

What do you mean by ‘regular hives’? what sort of bees are you talking about?

Hi Kirsten, by regular I should have said “stinging” bees….not sure what variety but I’ve kind of seen different imagery of harvesting where it looks like a kind of slat / rack that is removed and has honeycomb etc with dripping honey…I may be right off track….

Kallista check out our blog archives to get a better understanding of european honeybees vs these native tetragonula species? https://www.milkwood.net/category/natural-beekeeping-2/

Any tips on how to entice the native bees to move into a new bee-box or can this only be achieved through splitting?

I second your comments about Tim. He was fabulous on Sunday (as was Tony) and I learnt SO much. The honey does have an amazing flavour. As you say – millions of flowers in one mouthful.

Back in the 1960’s we had a couple of bush fires go through near where we lived which burnt down some trees that had bee hives in them. One was the native bee and with a fire at one end, it was a quick job to cut out the hive before the fire got to it over night. The bees didn’t survive but the honey we were able to get was beautiful, very strong flavoured but not as runny looking as that shown in the pics above. It was also near black in colour and from memory we got about… Read more »

This looks so interesting and fun and unique, I’m following this up. Thanks team.

0
Reply
Go to Top
wpDiscuz
11
0
Would love your thoughts, please comment.x
()
x
| Reply
Bookings for our next class of Home Mushroom Cultivation are open this week.
Join us!
Send this to a friend