One way to obtain yourself a healthy honeybee colony to put in your hive is to catch a swarm.

While this might sound daunting, catching a swarm is entirely doable, and there’s many ways to go about it.

Swarming is an optimistic act, and usually an indication that the colony has outgrown its hive space due to a good season causing the colony to expand.

At this point, the colony will raise a new queen, and once she’s ready, some of the colony will leave the hive in the form of a swarm, clustered around one of the queen bees, to go find another hive space while the rest of the colony, with the other queen bee, stays behind. As for how to obtain a swarm, there’s various options… Steve’s bait hive on the roof of his carport – success!

Catching a swarm with a bait hive

This is the most passive way of catching a swarm – put up some bait hives in likely places, and cross your fingers. Bait hives need to be checked regularly, so close to your home is best.

When honeybees swarm, they send out scout bees ahead to find a suitable home, who report back to the main swarm following along behind until a suitable place is found. This is why you will find swarms occasionally in places like clustered on tree boughs, letter boxes and on fences – that’s the main swarm resting while the scout bees do their thing.

The idea with a bait hive that that you are providing an awesome solution to this particular swarm’s needs – namely a great place to establish a colony.

A one-box warre hive is perfect for this job – put your u-bars in with starter strips, site the hive somewhere likely, and cross your fingers.

There’s also a host of bait hive plans on the internet, but if you’re Warré beekeeping, using a hive box makes the most sense. The image above shows Cameron Wild’s bait hive design – a swarm box with a limited entrance (and a door to allow for easy moving to a more suitable apiary site once the swarm are inside) with a Warré box ontop, where the colony will hopefully establish.

The idea with this design is that once the swam arrive, they will start establishing in the top box, and the bottom bait hive part can be easily removed with minimal disturbance to the bees above. Nice one, Cameron! Where to site your bait hive

Bait hives do well up above head height, for a few reasons – partly because it’s out of everyone’s way, and partly because when bees are swarming, they tend to fly overhead, not down at ground level!

That said, make sure your bait hive is somewhere you’re able to get it down from, if and when it’s full of bees! As an extra allurement, you can add a swarm bait to your bait hive – the idea being that the scout bees will detect your bait hive and be attracted by the smell, and then decide that your bait hive is just what they were looking for. Your options are to go the natural route, or to get a pheromone-driven one from a beekeeping store.

From the natural beekeepers we know, the results of using a swarm baits are… varied. Some think they’re a waste of time, others swear by them.

A note that if you do use swarm baits, make sure they’re at least 100 meters from any existing beehives.

Here’s a post about our friend Steve Williams, a home beekeeper who successfully caught a swarm by placing a bait hive on his carport. Paul Ward coaxed a swarm into a cardboard box, then opened it infront of his waiting Warré hive… and in the bees went.

Other (more pro-active) ways to catch a swarm

So the OTHER way to catch a swarm is to do just that… catch one.

Typically, when bees are swarming they are at their least aggressive – their imperative during swarming is to protect the queen and find a new home before the energy in the form of honey in their bellies runs out.

So unless the bees consider you to be endangering the queen, they should ignore you, for the most part.

Catching a swarm depends on where it is – if it’s 20 meters up a tree, it probably is not for you. But if the swarm is on a bush, or on a low-hanging branch, it can be as simple as giving the branch a sharp knock, while a sturdy cardboard box is placed underneath it. Once the majority of the swarm is in the box, cover it and leave a few holes for the rest of the swarm to enter into.

Once it seems that the vast majority of bees are in the box, seal it up and transport that box to a suitable empty hive. Undo the box, leave it at the hive entrance, and cross your fingers. Alternately you can deliver the swarm to the opened top of the hive, on the top bars, and the swarm should crawl down into the hive (a bit of smoke may be helpful here). Emily helping to re-home a swarm resting on a clothesline

There’s a great post by the Hand To Ground crew about catching a swarm from a clothes line and installing it in a waiting warré hive.

There’s also calico swarm catchers that you can get – a bag on a pole with a hinged lid – that are intended to dislodge swarms from tree branches into the bag, then the drawstring at the bottom of the bag can be loosened to let the swarm into the top of a waiting hive.

As with anything, if you’re not confident you can do it by yourself, don’t. Get advice, read lots, and assist and learn where you can, before you try and catch a swarm yourself. 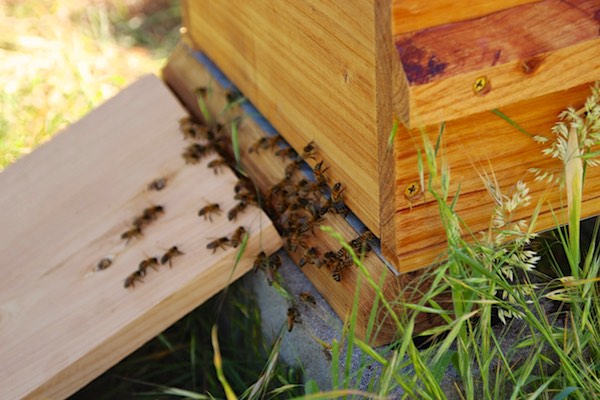 Many amateur beekeeping associations have ‘swarm lists’ of folks who can be called apon to remove swarms – might we recommend that you find someone who’s happy for you to tag along and build your confidence for catching swarms this way.

Its also possible sometimes to buy swarms from swarm catchers – again, find your local bee club and start asking around.

Big thanks to all our natural beekeeping network who contributed photos to this post – Cameron Wild, Hand to Ground Emily, Steve Williams, Paul Ward and Michelle Bowe.

I was wondering why swarm traps need to be 100 metres from hives? I was thinking of putting a swarm trap in the front tree, mostly just out of interest. I would of course re-home them safely but probably wouldn’t keep them long term as I already have two hives in the back yard.

Do I need to keep swarm traps 100 metres from my hives?

If they have swarm baits in them, the thinking is that the baits might attract a already housed colony. We do know folks that just put empty hives near their full hives (without swarm baits) and hope that if the bees swarm they’ll go next door, so to speak…

Saw a scientific paper that said best bait hives are up 5 meters – facing east (rising sun) protected from midday sun and highly visible entry at least 5 cm across. (it recommended strapping on a tree trunk on a lightly leaved tree).

As long as you’ve got a strong tall ladder and enough strength to get it down, then by all means, go 5 m up… 🙂 – but you can do it lower, if that’s not possible.

oh and putting something soft in front of your own hive when you expect swarming because the bees will settle in front of their own hive to sort themself out before they fly off. The best design I saw had three eaten dried corn cobs (you know whats left over when you have eaten the cob) tied by their cover leaves to a horizontal pole dangling in a little bit overhead in front of the beehives entrance.

How do you know WHERE to go to catch a swarm?

Great post but it is important to think about biosecurity.
I am concerned about Varroa coming into Australia – a swarm near a port is actually high risk and all it would take for an infestation is an unsuspecting beekeeper moving the Varroa infested swarm.

Bees are not vicious. If a dog barks to you, you might be invading its range. If the bees perceive you as a threat, they might attack you. A swarm is not usually dangerous, because swarming bees need to keep their numbers and if they sting you, they will die. Swarming is a transition state and the bees are usually heavy because gorging honey to carry make then heavy. The queen’s pheromones keep them together and if they already have a nice home to move they will do in their own. You could also force them in a box if… Read more »

Thanks for all the useful information and other great stuff you produce.

0
Reply
Go to Top
wpDiscuz
11
0
Would love your thoughts, please comment.x
()
x
| Reply
Bookings for our next class of Permaculture Living are open this week.
Join us!
Send this to a friend