Seedballs: from Fukuoka to Green Guerillas The poetry of the Seedball concept is simple, yet immense. Encase a seed (or seeds) in a protective jacket of clay, creating a Seed ball. Distribute Seedballs across ground, not worrying if this day, or this month even, is the best time to ‘sow’.

Protected from insects, birds, heat and sunlight until the time is right, the seedball activates with a rain event which is sufficient to soak through the clay coating to germinate the seed. Which incidentally is the sort of rain event that you want to have directly following the perfect seed sowing day. And that’s it. But that’s not all.

Let’s talk ferment. Add compost to the clay. Now you have something to kickstart those seeds after germination. Add more growing medium to the Seedball. Even better, for some situations. Add more that one seed. Different seeds. Compatible seeds.

Now you’re companion planting in the palm of your hand. Seedbombs the size of mandarins, which contain the beginnings of a field of wildflowers, or a hardy herb patch, or a bunch of soil-conditioning legumes. Now you’re talking revolution.

Seedballing was probably initiated by Masanobu Fukuoka as part of his experiments in gentle, non-invasive farming methods at his family farm in Japan. A gentle pioneer of the organic farming movement, Fukuoka practiced a system of farming he called ‘Do Nothing Farming’, which is code for setting up a passive system that is as self regulating as possibe (how very permaculture). Fukuoka used a combination of powdered clay, fine compost and seeds, with simple tools like a series of screens, to make hundreds of seedballs every year as a part of his farming regime.

Fukuoka called seedballs ‘a small universe in themselves’. His seed ball theory and methods are well outlined in his small manifesto on farming, eating and the limits of human knowledge, the delightfully readable One Straw Revolution, which incidentally has just been re-issued as a new translation in paperback (yay).

The beauty of the seed ball principle is not only its simplicity and economy of production. Seedballing can be used like a sort of amplified natural selection… Nature, ultimately, still decides what to grow where, but if the conditions in a particular place are right, you now have a crop. Or a stand of fast-growing pioneer trees, or a meadow.

There is a patience needed for this method – call it stealth sowing. The seeds may germinate next week, or next Spring. Or not at all. Wait and see. And in the meantime, move on to another chore. Or make more seed balls and seed elsewhere! 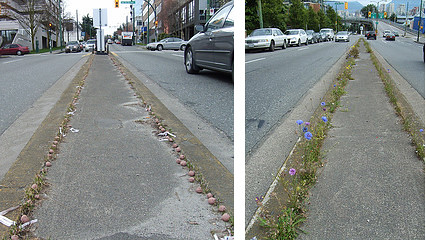 Guerilla seed ball action in Vancouver – before and after. Photos by Urbanwild

Seed selection is of course a fundamental factor in this method. You will be broadcasting these seedballs and probably leaving them to fend for themselves. The hardier and more appropriate to the environment the plant, the greater the chance of success. Here at Milkwood we are currently seedballing a wide mixture of acacia seeds and nitrogen-fixing tree seeds, with a sprinkling of woody ground covers and hardy native grasses. These are all being broadcast along our riparian zones, swales and future shelter belts.

We can now ‘plant’ thousands of trees in a day, in un-favourable conditions, and leave Nature to do her thing…

Since Fukuoka got the ball rolling, so to speak, many others have since been getting their hands dirty and producing seed balls, seed bombs, seed grenades and other heroic-sounding lumps of clay with seeds in. There is a heap of info out there on technique, but not much documentation on results that I have found, apart from anecdotes and Fukuoka’s plainly successful examples.

Moving from the rural to the urban, seed balls and seed bombs are now firmly in the domain of the worldwide guerilla gardening movement. If your community doesn’t have one, it’s probably time to start a guerilla gardening group, which is both a funky way to spend your spare time (or all your time) and might just increase your food security. And a seed balling workshop would be a very fine, inspirational and easy inaugral event to hold. 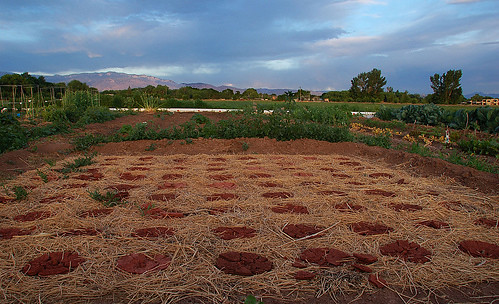 Milkwood is currently being sprinkled in seed balls, and we will be sure to document the results (and how to make a bicycle powered seed balling machine – stay tuned!). In the meantime, here’s a smattering of where the seed ball craze has spread so far:

Masanobu Fukuoka: Firstly, Fukuoka’s texts, including Seed Balling technique, are all bunked at the Soil Health Library, an amazing online resource which has thousands of seminal farming texts available for download. Make sure if you use this option to donate, to keep this resource breathing.

Jim Bones: Who used to have an extensive website on the subject called seedball.com which is now defunct. Happily, his how-to and why-to video, The Seed Ball Story, has found its way to Youtube.

Kathryn Miller’s Seed Bombs: an early example of Seed Bombs as art from 1992. ‘As a form of urban and suburban guerrilla activity, it was a small scale, non-sanctioned intervention in the landscape. The seed bombs were made available to museum visitors to take and throw somewhere they felt needed native plants, and in the process they assisted me with my project.’

Seed Bomb how-to: there are heaps of videos up now in this technique, but this is one of the most concise. The host, Richard Reynolds, also has the best hair.

It seems strange somehow that something so simple and small can hold so much power, but I’m beginning to think that’s the way of things, these days. And of course it comes back to the power of the seeds themselves. Just the idea of it – portable, potential ecosystems, folded in on themselves many times over. Amazing. I think I’m in love. Thanks, Nature! Thanks, Masanobu!

Happy holidays, everyone. May your next seed experience, whether it be on your salad, in your garden or just out of the corner of your eye, fill you with wonder, joy, and a sense of renewal.

i think the american people started this technique, thousands of years ago…
🙂

-1
Reply
Go to Top
wpDiscuz
0
0
Would love your thoughts, please comment.x
()
x
| Reply
Send this to a friend