Yesterday Ashar and I went mushroom foraging at our local pine forest, just to see what there might be after a rainy day in Autumn. And look what we found! Slippery Jacks. Yum. Slippery Jacks are usually found in pine forests. Or at least that’s the only place I’ve ever seen them. We found these on the forest’s edge, in the grass, near a quiet road.

They are slippery on top and have this fantastic pore-structure beneath, which is sturdy yet spongy. They are found across the world in pine forests, and have all sorts of local names, my favorite being ‘sticky bun mushroom’.

Once you have your Slippery Jacks, you need to peel the brown sticky part off before eating them, as it’s not so digestible. I also read that it’s best to take the spore/sponge part off, and in the interests of wanting my 3 year old to actually eat them, I did that too.

After all that peeling, you’re still left with a surprisingly meaty mushroom which smells fantastic. We already had a lasagna feast (with Milkwood passata) planned for dinner, so we decided to dry these mushrooms to concentrate their flavor, and save them for Winter soups.

So into my new whizz-bang dryer the Slippery Jacks went, and 3 hours later, out came crispy little golden crescents that taste damn fine. 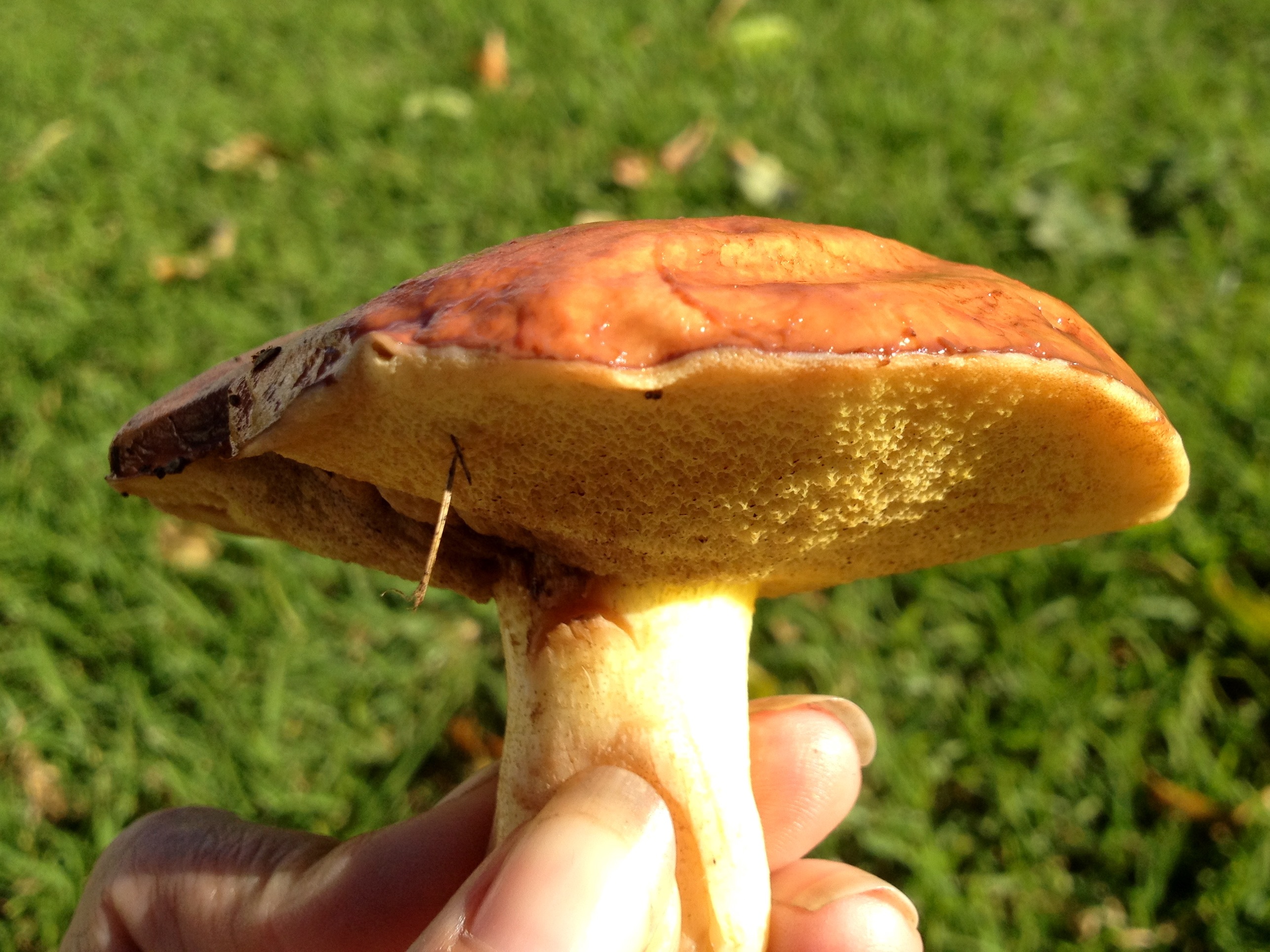 So if you’re near a pine forest (or even just a small stand of them up the back of the street) this weekend in temperate Australia, go forth and forage! May you find many Slippery Jacks. Also look out for Saffron Milk caps.

CAVEAT: When foraging for mushrooms, do your research and know what you’re looking for – it’s not rocket science, but you do need to be clear about what you are looking for, and whether that species has any toxic ‘look alikes’. Have a look at our recommended books on fungi found in Australia. And if in doubt, don’t eat it.

CAVEAT II: Via Kuba on the Milkwood Facebook page – There are other boletes (sponge-gilled mushrooms) in Australia that are inedible, either because they taste bad, or because they are poisonous. For novices: if a bolete is bright red and/or it turns dark blue when cut or bruised, then it isn’t edible (nor psychoactive, despite the blue staining). Just wanted to point that out because I’ve found the toxic Boletus barragensis growing near Slippery Jacks and they can look quite alike (except for the bluing).

Lastly here is a good post i found on Slippery Jacks from a fellow forager. And of course our friend Diego at Wild Stories, who just came back from another successful mushroom hunt.

If you’re really keen and want to take mushrooms to a year-round thing, you could do worse than come to a Mushroom Cultivation workshop with us, which will get you cloning, spawning, cultivating and fruiting a bunch of different and delicious mushrooms like a mad thing.

>> more posts about growing and eating mushrooms at Milkwood.net

Useful points via Kuba on the Milkwood Facebook page: I hate to be a myco nerd but I thought I should point out that the fungi in your photographs are Suillus granulatus and not Suillus luteus. Both are edible and quite similar morphologically and gastronomically. The difference is academic. Again, sorry for being a nerd 🙂 The other point is a little more ominous and that’s that there are other boletes (sponge-gilled mushrooms) in Australia that are inedible, either because they taste bad, or because they are poisonous. For novices: if a bolete is bright red and/or it turns dark… Read more »

Yes, S.luteus has remnants of a ring on the stem,
but same same otherwise, both are ‘Slippery Jacks.’

I’ve found Suillus lakei under Douglas Fir (Pseudotsuga menziesii)
in The Otways, Vic.
but apart from that,
they only grow in association with the roots of Pinus spp.

Hey Kirsten+Milkwooders, thanks for the mention. I would like to add a little piece of knowledge that I recently collected in my foraging (you never stop learning) about the dry Slipperies up there, hear what Anja has to say: “picked [pine mushrooms] around Oberon…it’s got too popular now (used to only be eastern europeans in the 60s & 70s) now my siblings go to Belanglo. Pine mushie caps make excellent schnitzels; dip in egg & breadcrumbs & fry. Slippery jacks need peeling and pickle well. Neither are very good dried: pine ones just go woody, jacks are too moist. Grey… Read more »

Nice! I very much like the ‘pinky’ dearest Ahsar!

Thanks for the ping back. Mushroom foraging in the pine forests has been a revelation to me this Autumn. Saffron milk caps especially.

I understand that Mushies love growing in used coffee grounds. Worth asking your local cafe how they dispose of theirs, if you’re going to take up mushie-growing. The grounds are generally excellent as compost for the vege patch as well.

you are so brave! I’m terrified of picking mushrooms. I only do it if I have recently spread commercial (spent) mushroom compost in the vegie patch so I’m sure.

I think I have found some slippery jacks, if I post a picture could you guys help me id it?

we’ll do our best, Matt! top, side-on and bottom views?

ok here are my pictures, actually not sure how to add pictures.

I have posted them on milkwoods facebook page, hop this is ok, I also think I have some saffron milk caps.

they are actually now in a private message on milkwoods facebook page because I thought maybe they shouldn’t be on milkwoods main page!

It’s not true that boletus mushrooms that turn blue when cut are poisonous. In Europe they are considered delicacy and we have picked them whenever we could find them here in Australia as well. We have NEVER been sick from eating them. The only thing you have to remember is not to drink any alcohol with the meal of these mushrooms as the alcohol will turn these mushrooms toxic.

Hello, Thanks for sharing this info, it helped me positively identify the boletes I found today as slippery jacks. I wanted to ask about a certain passage in your article that claimed that if a bolete is bright red or stains blue that it is inedible. However, I think the red cracking bolete, an edible, disputes this.. it’s scientific name is Xerocomellus chrysenteron, and it was previously known as Boletus chrysenteron. Perhaps the reason for the name change is that it was discovered that it didn’t actually qualify as a bolete.. does anyone know about this? Thanks for fueling my… Read more »