Growing mushrooms at home might appear a little tricky when you’re starting out.

And granted, sometimes it can be. But it can also be super easy., if you take it one step at a time. Prettymuch nothing describes the process of cultivating various mushrooms better than a diagram we love from Growing Gourmet and Medicinal Mushrooms, by Paul Stamets.

Stamets is a mycologist for over 20 years (and has even discovered four new mushroom species!).

And the diagram above from his book is the bee’s knees (or the mushroom’s spores?) for explaining the different ways of cultivating gourmet mushrooms.

In essence, the first stage of the process is similar for all varieties: you must either obtain or propagate a ‘pure culture’ of your desired mushroom variety.

So first up, you have to obtain a sample of the fungi you wish to propagate. This sample can be in the form of:

Spore prints can be purchased or collected directly from fresh mushrooms.

Mycelium growing on agar plates can be purchased from a variety of mushroom cultivation suppliers world-wide (or sourced via online forums or communities).

A tiny piece of mushroom is the other option – you can take a sample from just about any freshly sourced or store bought mushroom. Spore prints are one option for creating cultures… Or you can take a sample from a bought mushroom… An early edition of the Milkwood DIY agar sterilisation unit (orange tablecloth optional). The milo is for the malt component.

The next step is to start propagating your pure culture so that it grows to the point there it’s plentiful enough for you to inoculate a bag/bucket/log/garden bed of growing medium with it.

Typically, pure cultures are grown on an agar medium (malt extract agar or MEA for short) which is sterilised with a pressure cooker and poured into a petri dish.

Once it is cooled and set firm, your mushroom or culture sample is carefully added and then left to grow over the agar (the malt in said agar provides easy food for the mycelium).

This takes from a few days to a few weeks depending on the vigour of the particular variety you are growing.

Of course, all this needs to be done in as sterile environment as possible, so that only the fungi that you’re adding (and no other weird moulds) multiplies and thrives on that sterile agar.

Most people getting into mushroom cultivation start by creating a DIY still air box that reduces contamination, if you’re prepared to invest a little more money you can get yourself a basic laminar flow hood (check ebay for AU options, there’s heaps).

It’s also important that you keep the environment very clean while you’re propagating.

The easiest way to do this is by wearing gloves, clean clothes, and spraying the whole area and all your tools with a mixture of 70 percent alcohol (methylated spirits) and 30 percent water. 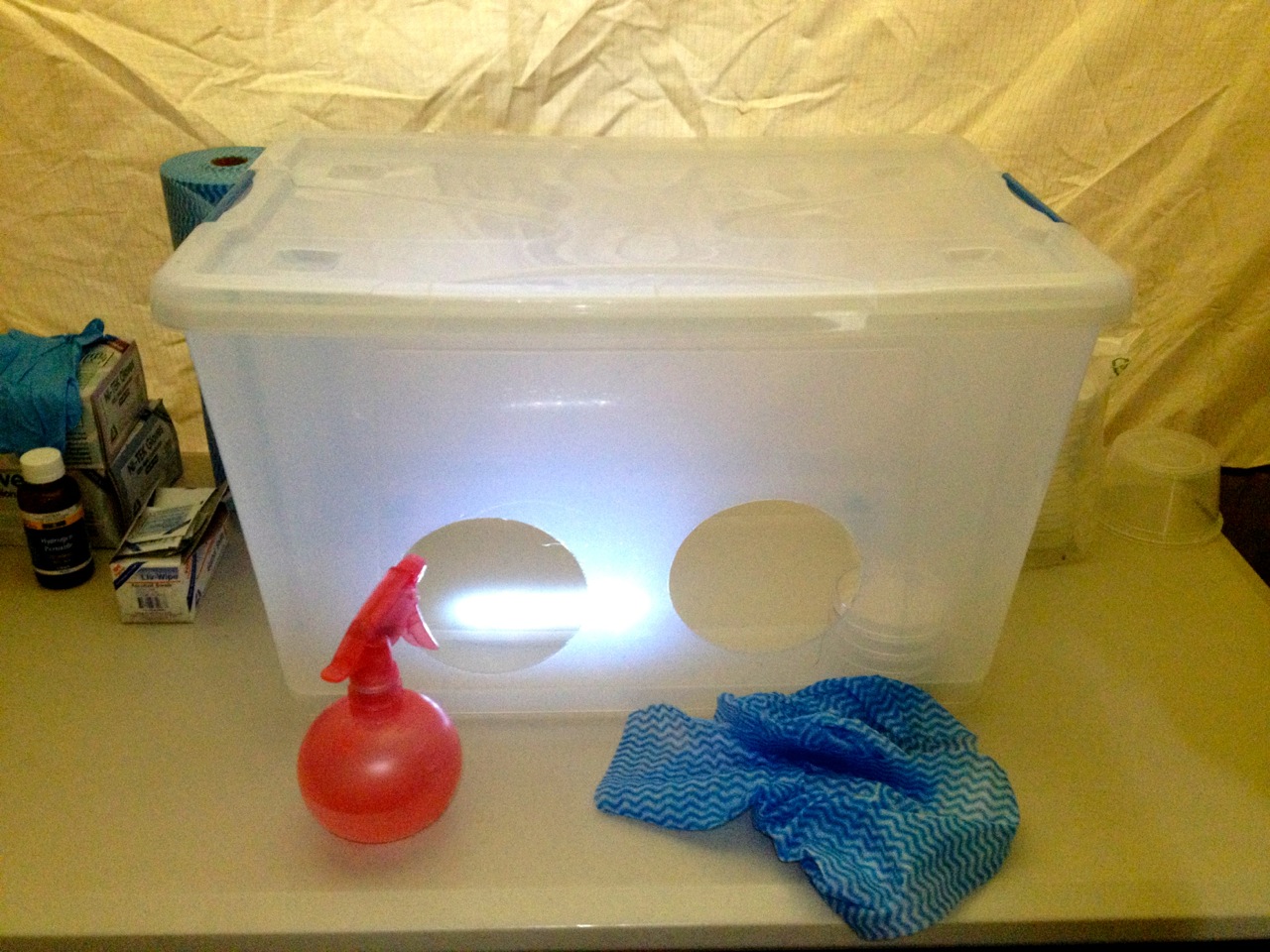 DIY airbox. Not as great as a laminar flow cabinet for ensuring a sterile environment, but way better than nothing, and fairly effective. ‘Cloning’ a piece of mushroom by placing it on the malt agar to create a culture (and later, more mushrooms) After the culture (the white stuff) has fully colonised the agar plate, it can be divided up to create more cultures on more plates… And on and on you go… until you have lots and lots of healthy plates of mycelium! In Part 2 of this series, we’ll take a look at how easy it is to make a still air box to improve your success and reduce the rates of contamination on your agar plates … bleurgh.

Once your mycelium has almost completely covered your agar plate it’ll be time to move onto the next step – Part 3 – making grain spawn. And from there, it’s on to the fruiting stage!

All our mushroom articles, ebooks  and resources are here. Well that looks like the kind of biology/scientific experiment I’m happy to eat!

Reblogged this on The 1910 Bottling Company Blog and commented:
Hard Cheese???

Reblogged this on Female & Fungi and commented:
Ever heard of Milkwood Permaculture? They are a super cool organization near Sydney, Australia that shares skills through interactive courses and online tutorials. They have a special love for fungus and have a lot of cool blog posts on DIY Mushroom Cultivation. Here is one on called “The Culture”, but don’t forget to check the rest of their posts out!

hi Alan ward loves mushroom and has purchased, flow hood and cooker, soon. experimented with some success with his own diy and hopes for more success, soon.

Can you grow the fruit bodies is the Petri dish??? From the mycelium

Hi, Thank you for a great article! In this article you mention part two of this series. can you please give me a link? I’d really like to see it.

0
Reply
Go to Top
wpDiscuz
7
0
Would love your thoughts, please comment.x
()
x
| Reply
Bookings for our next class of Permaculture Living are open this week.
Join us!
Send this to a friend