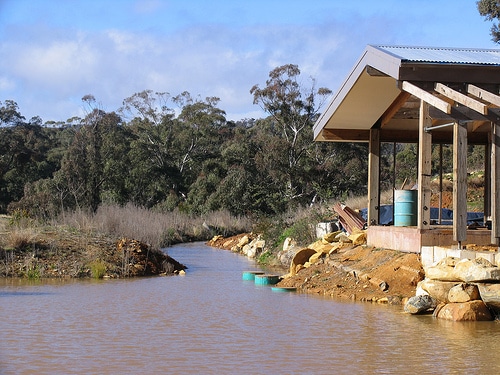 For the last 2 and a half years we have waited for the big rain which would test the capacity of our water-harvesting earthworks. And waited. We’ve had a bit of rain here and there, but the summers have been hot and dry these last two years, and we had gotten used to life with half-full dams and swales which were good roads, but rarely wet.

And then, when we least expected it, our system filled up. Finally. One thing that is usually done the first time permaculture earthworks ‘fill up’ is that you observe the spillways and the swales to check the levels. Water is the ultimate leveler. Water lets you know if any of your swales are a little low, a little high, or generally off contour.

Though we had surveyed our swales as best we could, and adhered to the ‘measure thrice, cut once’ adage of permaculture earthworks, we knew that the real test of our swales were the first time the system filled. Only then would we see if the spillways were exactly right and that the water was being directed as it should through our system. The water-harvesting earthworks design for Milkwood

Of course, if you live in most landscapes you have a lot easier time than we did at Milkwood when constructing the water harvesting earthworks we’d designed. Most landscapes consist mostly of topsoil and subsoil, at least for the first meter or so. But not Milkwood. Milkwood specializes in shale, road-base and rocks. This means that creating things like swales (and dams) is easier said than done.

None of this ‘just dig out the subsoil and make a nice mound downhill’ business at Milkwood when it came to making our swales. We had bedrock popping through the surface at inconvinient points, shale where we needed soil and nice reams of flint for good measure. Sort of like the difference between playing toy bulldozers in a sandpit to a gravel bed. You get the idea. Re-setting the top spillway next to the top dam (note that this dam is now holding water!)

Anyway. Last weekend, we go the dump we had been looking for all this time. Our swales did their job perfectly and our dams are now full. Fuller than full. The spillways along the swales just needed a bit of nudging to perform as they should – to spill the right amount of water from each swale down into the next one, filling up the system from top to bottom.

Our spillways save our dams in times of heavy rain, but they also feed the system below them. In heavy rain, the swales harvest the runoff and fill slowly, directing the water to any dam that’s placed at the end of them by default as they fill. The spillways are measured to be at the right height so that, when the dams are full enough, the water level rises above the spillway and ever-so-gently flows out and over it, rippling down across the landscape, and into the next water harvesting feature below… Jesha the cattledog seems satisfied with the result

In order to nudge our spillways to the right height we used two things: the water in the swales (as i said, the best indication of level around) and Justin with his little excavator. This guy used his excavator just like an extension of his hand – a scrape here, a flick there, a pat and a nudge there. And in no time flat, our spillways were perfect in level and in height in relation to the rest of the swale and dam system. Hurrah! wow brilliant guys!
so good to see it all happening!

Yeeha! Great to see the pictures and hear about the process. Thanks for the update.

I have been dreaming about swales and Yeomans ever since the earthworks lesson in the course. It’s intellectually addictive stuff, I can see why you love it!

Thanks all, yes it is so very VERY exciting… tho 5 years back if you’d told me i’d be hopping from foot to foot with excitement because a couple of ditches had filled up with water, well…

0
Reply
Go to Top
wpDiscuz
12
0
Would love your thoughts, please comment.x
()
x
| Reply
Bookings for our next class of Permaculture Living are open this week.
Join us!
Send this to a friend