Seed Balls: how to grow trees without really trying While we started off experimenting with annual and ground cover species seed balls, to date I’ve been most impressed by how useful they’ve proved to help us establish trees in unlikely areas.

As I’ve mentioned before, we’ve been trying to figure out how to establish trees and increase biomass on the rocky, soil-deprived parts of Milkwood without breaking our backs or our hearts. And I think seed balls might hold the key. 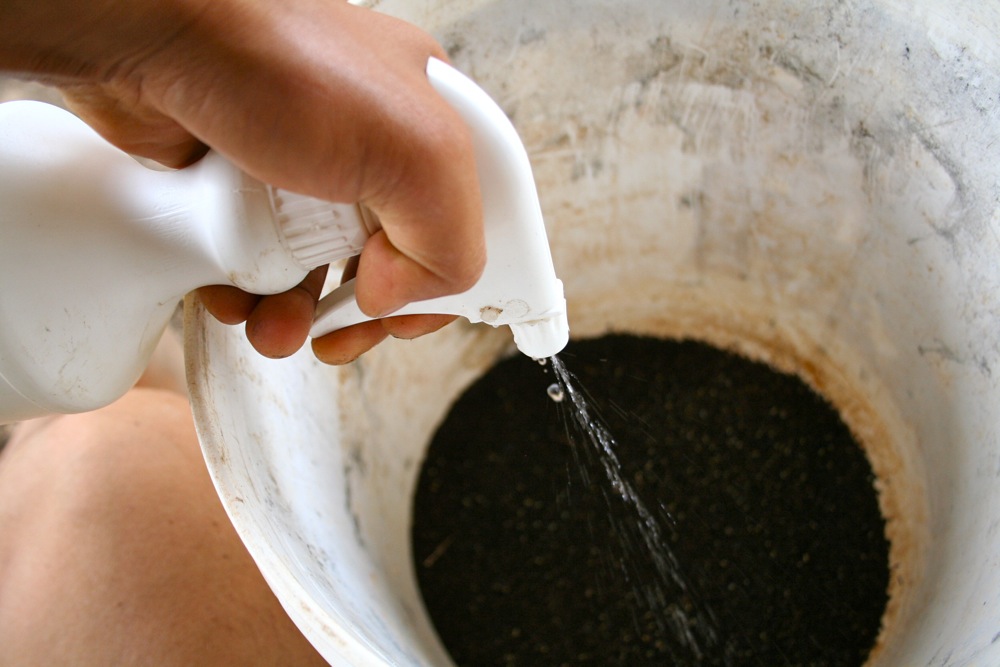 Roughly pinched balls of the mix And then it’s time to roll! Ko Oishii doing a seedball workshop with our PDC students The completed seed balls drying… ready to go forth and propagate!

Thanks to Milkwood intern Ko Oishii spending considerable time in 2009 tinkering with seed ball mixes and combinations, we’ve discovered a few things we can now share with you.

Though these might not seem like the most amazing revelations if you live somewhere lush and treed with abundant biomass and topsoil, for us at Milkwood, it’s very exciting stuff.

The main revelation is that scarification works for seed balls. Scarification is the process some seeds need before they can germinate, and it’s generally something that you do just before you plant the seed.

With seed balls, however, the point of ‘planting’ is by definition erratic, as it’s determined by the next big rain. And for many of the nitrogen-fixing pioneer species we really wanted to get growing at Milkwood, scarification was the main hurdle.

Ko experimented with scarifying Black Wattle (Acacia mearnsii), Silver Wattle (Acacia dealbata) Cootamundra Wattle (Acacia baileyana) and Tagasate (Chamaecytisus palmensis) seeds by the boiling water technique, and then seed balling those seeds. It would appear that within the seed ball (a necessarily dry environment) the seeds went back into hibernation, and halted their germination post-scarification.

And then, after those seed balls had been distributed across Milkwood in particular areas, those seeds got activated in due course by a big rain which melted their clay coatings, and guess what? They grew, and they grew well.

Uhuh, I hear you say. Ok so you soaked some seeds, you put em in clay balls, and later on they grew. That’s great, Kirsten. And your point?

My point is that we have many patches of Milkwood which are really inhospitable to plant life, and we want to change that. We have, for example, the suntrap – that failed top dam which is now a big rocky north-facing amphitheater, waiting to be reborn into a truly awesome microclimate (fingers crossed for bananas).

We also have the back-sides of our swales – long snakes of bare land through Milkwood which should, in a perfect world, be nodding with high grass. But they are not. Partly due to the drought, and partly due to us not having the time and resources to focus on them enough.

We also have all manner of rocky and bare patches, and places that we want better tree cover. But it’s always a case of prioritizing time and resources to make it happen, and in balance with that is the likelihood of the trees’ survival in yet another year of erratic rainfall.

And so that is why I am so excited about seed balled, nitrogen fixing, evergreen pioneer tree species that seem to be effectively gaining a foothold in these areas, where not much else has survived. Lastly, we’re really looking forward to getting our ‘seed ball regime’ solidified this season, so it’s a part of the yearly cycles here to produce and broadcast this type of seed balls at Milkwood Farm.

Anyone out there got any successes or otherwise in relation to seed balling pioneer tree or shrub species?

why you don t put the pigs in the sun trap for a while with a protection against the sun and after that you try your seeds balls with some green manure in it. so first step to improve the soil before planting the fruit trees in few months

hmm. good idea, but the pigs are better at rooting than they are at manuring, i think thus far (tho if you had 20 that might be a different story) – also our hire-a-pigs are not as well trained as to stay inside a single strand of wire… still, a animal tractor could be the go up there in due course!

Hi – I love the idea of seedballs – and what fun to have so much room to fling them around in – in a controlled and highly planned way of course!

I have nominated you for a Versatile Blogger award cos I love reading your blog posts. Come to my blog (canberragreenie.blogspot.com) to retrieve your award
Greenie x

I think this is a very interesting & promising technique so thanks heaps for sharing the information in such detail. I’m wondering if the “Acacia dealbata” is actually Acacia baileyana? Cheers, Alex.

Great idea, but also remember to throw in some shrub seeds for the first understory. It is obvious that you have studied up on the different germination techniques such as scarification and also the need for some tree/shrub seeds to have a fire/smoke pre-germination? The bottled liquid smoke works well for this technique. I found that inviting the birds to our homestead was the fastest way of establishing all lthe trees, shrubs, wildflowers we could handle. We ended up with some species that were not even native to our area nd we didn’t plant them so the birds droppings obviously… Read more »

good old Silver Wattle. We are very lucky to live in a place where trees grow and we get good rain, so seed balls are probably not as important as for you guys. We had great sucess with trees coming up due to earth works. Our driveway was bare paddock and now its lined in 7-8m tall silver wattle. Great wind break and now about 5 years on there are other species popping up underneath, plus wombat holes and birds nesting. Great for controlling the summer grasshoppers! Scarification by machinery (eg grader or bobcat) can be used around here to… Read more »

This seed balling is so exciting,This expands my possibilities on what sort of land to buy for my growing, could this be another way to save the planet?
Just love it
Bernard

Great work guys. Some duff (soil and broken down litter) from under healthy stands of the trees you are growing wouldn’t hurt either to provide beneficial biology from the start. All the best, Cam

I have been seeking these details for quite a while. After couple of hours of online browsing, luckily I uncovered it within your site. I wonder why Alexa dont display these kinds of useful sites from the first few lines. Normally the first few web pages are full of craps. Maybe its a pointer to utilize other online search engine.

Some species also do well when ran through turkeys. You can dry the droppings that contain the seeds and put them in your seed balls. A number of plants need the enzymes and gizzard action for Scarification. They evolved by being eaten by birds. Also, turkeys can eat large hard seeds.

Scarification by having turkeys eat the seeds can also work with seed balls. You form seed balls out of the turkey waste that contains the scarified seeds. The gut enzymes and gizzard provide the scarification.

You are doing a great job experimenting and teaching such ideas of sustainable living. You seem to be growing Tree Lucerne though so just thought I’d mention that it might be good to teach about the problem of introducing weeds that are already known problems. There are other alternatives – even natives that fix nitrogen and offer fodder for domestic animals. Gvt Biosecurity already has urgent warnings out about Tree lucerne “Tree Lucerne (Chamaecytisus palmensis) is regarded as an environmental weed in New South Wales (particularly in central and southern regions), Victoria, South Australia, Western Australia and Tasmania. It is… Read more »

Any thought to using beans, cow peas, or other nitrogen fixing plants to build organic matter along with trees?

The key to weed trees is to plant trees goats will eat. The trees are cut down and goats use them as fodder trees. When new growth sprouts the goats eat them. You just run the goat when understory needs cleaned up.

Very impressive. Thank you for sharing in such detail. This is useful information. I agree with the commenter that suggested using legumes to fix some N in the soil. They can be very effective colonizers. The progress that you are having with the trees is wonderful. Their litter will certainly do a number on the soil once it begins to accumulate and become integrated into the matrix. I am working on seed balling some trees in a temperate climate. They are wintering over now. I will see what the spring brings in a few months (Northern Hemisphere here).

excellent post – i have been trying with elephant dung in Kenya to some success so far – but getting the right mix is tricky – there are so many options! http://kenyacharcoal.blogspot.com/2014/07/small-scale-rotational-branch-charcoal.html

wow what an interesting project – go you!

Nice ideas and wonderful enthusiasm. I am disappointed that there is no update to describe how the experiment went – germination rate for instance.

0
Reply
Go to Top
wpDiscuz
19
0
Would love your thoughts, please comment.x
()
x
| Reply
Send this to a friend