Much excitement this week as the bees finally arrived at Milkwood. Tim Malfroy brought around 3 Warré beehives, complete with bees, to install on our farm. And so I have officially become a Warré beekeeper, with all the fascination, responsibility and of course delicious raw honey that goes with that territory… 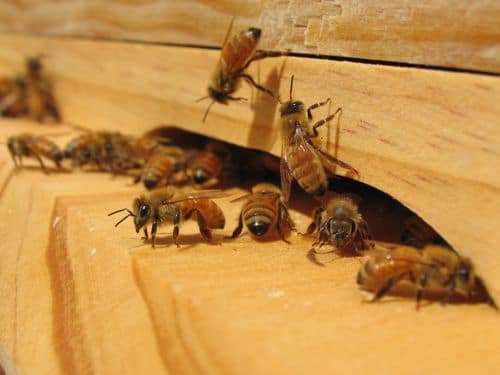 Bees at the entrance. Aren’t they amazing creatures?

I have a theory that beekeepers tend to develop really crazy eyebrows in sympathy for their bees – a bit like how some dogs and their owners seem to merge in facial attributes. I’ve had this theory since i was a child, and have done a sporadic survey over the years whenever i see honey sold at markets.

I have to say I never thought I would become a beekeeper until recently, but now I am one, I suppose i will have to keep a check on my own antennae-eyebrows progression. Hmm. I’m sure it will be worth it. 3 warre hives all set up

The place we chose for the hives is up in a little nook between the top dam and the suntrap ( i.e. the former top dam. All is explained here). This nook is protected from the hot western sun and all the wind sectors on the farm. It faces north-east, which we’re told is ideal, and is directly uphill from our slowly emerging upper food forest, which is scrambling across the slope.

Getting the hives level is important

We made 3 separate pads for the hives and leveled them carefully. As bees ‘draw’ their own comb in Warré hives (as opposed to building on existing artificial foundations), it is important for the hives to be level as the bees draw comb using gravity as their compass.

If the hive is off the level, the bees will draw comb which is slightly diagonal, and makes it very hard to inspect the hives without breaking the combs.

As we’ll be using these hives for demonstration in our Natural Beekeeping courses at Milkwood next year, Tim thought it would be good to try 3 slightly different hive formats, so we can all benefit from a bit of experimentation. The first hive has full frames, but with only a beeswax ‘starter strip’ of foundation in each frame, to get the bees going. The experimental ‘side bars’ warre hive

The second hive has ‘side bar’ frames, with no base, and again a small starter strip. The bees will attach the comb to the sides of the  frame, but will define for themselves where the comb stops on the bottom.

The third hive has just top-bars with a small starter strip, and is closest to a classic Warré hive. The experience of getting up close and personal with these intricately made creatures was nothing short of amazing. What impressed our crew the most, though, was how calm the bees were, and how comfortable we felt with them by the end of the morning. I think at one point someone said “i can’t belive we’re all just standing right here, next to an open beehive”. I understood Tim being calm, he does this every day. But here we were, Nick, I and 3 interns, less than a meter away from thousands of buzzing, crawling bees who were busy settling into their new homes.

And we were all grinning our heads off.

Whether this is a tribute to natural beekeeping and gentle bee-handling or we just got lucky with ‘gentle bees’ I don’t know yet. But it was a great start to what I hope will be a lifelong relationship. Bees getting accustomed to their new location

The hives arrived as three boxes which contained three colonies who had already started drawing comb. Each box arrived with an entrance board beneath it, and so were essentially a one box hive.

Once we set each box and entrance board up on its pad, we then nadired a second box underneath so that as the colony grows it can progress down into the box below, leaving a dome of honey above. By the time we harvest, these hives may be 5 or even 6 boxes high.

And when this dome of honey above the colony is big enough that we can have some without depriving the bees of their wintering supply, we get some honey! Maybe in the autumn. It depends how this season goes, i suppose. But there is many a flower a-bloomin’ on Milkwood this luscious spring, so we are hopefull![slideshow]

Via the contact page: Hi There! Firstly – great website! Beautifully presented, user friendly, interesting and useful. Congrats! Secondly – Im enjoying following your bee stories from my Facebook link. Yay. Just wondering about what a friend mentioned. He had a look at your site and is wondering about the use of plastics in the beehive(frame) construction and the effects the plastic may have on the bees or their honey. We all know the negative effects of plastics in our environment, what are your thoughts as to their use in bee hives and do you give it the yay or… Read more »

I know that Tim uses as little glue as possible in his warre hive construction, and seals them with linseed oil to minimize the bees exposure to toxins.

And from Tim Malfroy: Hi Fiona, I personally don’t use any plastic elements, glue, or anything synthetic at all in beehive construction. The hive is completely raw timber, with a few nails to hold it together (the boxes are finger-jointed, so few nails are needed) I dip the boxes for about 15mins each in a hot 100degC mixture of raw linseed oil and beeswax to preserve the timber because it’s softwood, rather than use wood presevatives and paint. Most commercial beekeepers use plastic foundation in their hives these days, but the bees hate it. The plastic has to be coated… Read more »

I have managed 35 hives for the past 25 years yet found your boxes interesting.
Recently I changed to hot bees wax dipping the boxes though many beekeepers are using 50% bees wax and 50% parrafin wax to reduce costs. Your use of Bees wax and Linseed oil is no doubt less toxic than Parrafin.
What is your mixing ratio and how fast can the boxes be put into service after dipping.

I use about 15-1 raw linseed oil to beeswax ratio, although sometimes it’s closer to 10-1. I have a stainless steel vat with temperature control element. The boxes are held in the mixture for 15mins at 100degC. Once dry, they’re ready to use – although it’s probably better to give them at least a few additional weeks drying time. After harvesting a box, I dip it again before placing back on the hive, which helps with preservation and keeping the hive clean.

Hi,
I really like your experimental ‘full frame’ warre hive. Did you make it yourself, or did you buy it from a supplier? I like the idea of a warre mixed with tradional frames. Any info you have would be much appreciated. Nice website!

Frames are quite fiddly to make, and I’m no woodworker, so I designed the frame to fit my modified Warré boxes and had them made at my local hiveware supplier.

Tim, I understand you have a few Small Hive Beetles in the Mudgee Bathurst district though nothing like the east coast. I have my bees in the north west of Sydney where beetles have taken over up to 90% of hives. We have used traps, water trays and just about everything to reduce their numbers. Recently I talked to a beekeeper from Queensland who noticed the ground in front of his boxes had been greatly disturbed. He also found Echidnas digging in front of the boxes. Nice to see the beetle grubs have an efficient preditor. Despite not having Echidnas… Read more »

Hi Ozeboy, Yes, I’ve had a lot of experience with SHB. My father was one of the first beekeepers to find beetles in his hives, back around 2002 in the lower Blue Mountains/Hawkesbury district. They’re a terrible pest, and not much can be done to control their numbers when things are in their favour. He ended up losing hundreds of hives, and moved his whole operation over the mountains to the cooler, drier tablelands where the beetles aren’t as big a problem. I don’t have any beetles in my hives, probably for a few reasons: 1. Cool climate 2. Elevated… Read more »

Re OzeBoy, I’ve had massive trouble with hive beetles and dung beetles destroying all of my beehives. I had little trouble on the coast of nsw, near wollongong, but upon transporting to my farm, past crookwell/goulburn they were wiped out within weeks. The main trouble was with dung beatles. I did a lot of reading around these pests and found that the DPI (?) or someone had released more than 20 new types – great! The only suggestion i can give you is to try and elevate your beehives and reduce the entry size to make if more diffucult for… Read more »

Sorry to hear about your problems. Please see my post above with a few tips about coping with SHB. I’ve never heard about problems with dung beetles, but will look into it. Keep an eye out for migratory beekeepers moving into the area for particular honeyflows – sometimes this results in fluctuations in SHB numbers.

0
Reply
Go to Top
wpDiscuz
16
0
Would love your thoughts, please comment.x
()
x
| Reply
Bookings for our next class of Home Mushroom Cultivation are open this week.
Join us!
Send this to a friend