Steam Juicing and adventures in Appledom Apples! They be everywhere. Red ones, yellow ones, green ones. Big and small. Round and wonky. Crunchy and soft.

There’s only so many we can eat. Time to get creative, and try out the fancy new steam juicer while we’re at it… Last year we took a global drying approach to apple preservation, and that worked well. 2 loads a day, 8 hours a load.

With our trusty apple slinky and the awesomeness of the Excalibur (see this post for details), we were still munching dried apples in November. Which is a good thing, because apple season around here doesn’t start till February. This year we’ve been getting funky with a pressure canner, which allows for faster turnaround times for preserved fruit than our dear old vacola units.

But the result is prettymuch the same – jars apon jars of preserved fruit, stored for winter pies and desserts and breakfasts with yoghurt and honey. I don’t have a photo of this just yet, sorry, but Gigi is cidering, based on the fabulous advice of Sandor Katz in The Art of Fermentation. Basically, it’s crushed apples, in a big jar, doing their wild fermenty thing.

I’ll report back on this one, hopefully while slightly tipsy. So this is a new thing for us. A steam juicer. In short, it steams the juice out of the fruit and then you tap it off into bottles, seal them, and store for use later.

This technique produces a pasteurised juice, of course. Which means that you can store it in an un-alcoholic and stable form for future use.

We don’t have a good cold-store on the farm yet to store apples effectively till spring, so if we want to get off the supermarket train, home-made juice it is. This system is pretty super convenient because the juice comes out super hot, so you can just tap it into a bottle, seal the jar and there you have it.

We’ll be running this unit on our woodstove when we have it on during cold nights this Autumn, to use the excess heat of the stove for juice making. A nice little stacking of functions. Apples steaming in the steam juicer 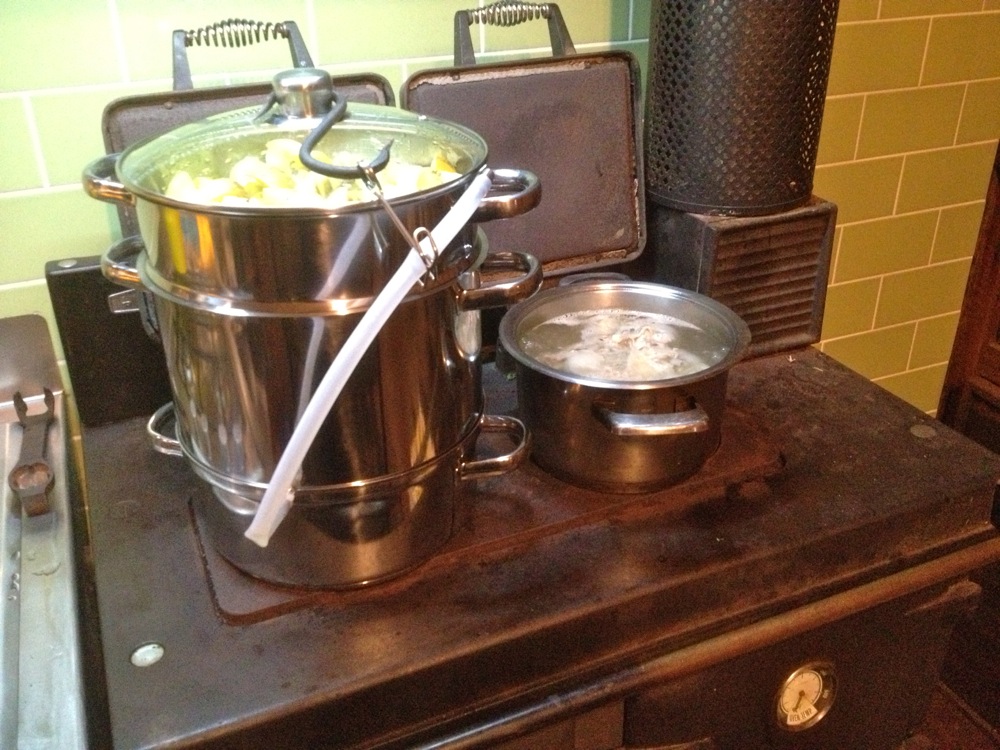 Steam juicer (and chicken stock) on the woodstove, bubbling away Our first run: 10 kg of apples made over 4 litres of pasteurised winter apple juice. The leftover apple mush could be used to make sauce if you like.

We sourced our steam juicer from our mates Nikki and Dan at Scythes Australia, who also import German fermenting crock-pots. And the most beautiful Austrian scythes. the juicer was $150 but I can’t see any way its stainless steel will wear out (with the exception of the easily replaceable tapping tube) in my lifetime, so that’s fine with us.

In addition to the above apple processing, there is of course apple pie, applejack and a couple of other apple adventures we’ve not yet taken. But there’s always next Autumn.

What are you turning your apples into this season?

>> More posts about preserving the harvest Video: How to grow Sprouts and Microgreens on your Kitchen Bench
March 9, 2020

After you steam juice your apples run the pulp thru a victoria you can either make applesauce ( a little thicker than normal applesauce) or add a little cinnamon and add a little sugar put in a food dryer to make fruit leather. Grand kids love it

Are there factors which make a fruit able or unable to be steamed? Is citrus worthwhile?

Man, you guys have THE BEST gadgets! Normally I feel inspired reading your posts but right now I feel kinda jealous… but also excited for you ( :

Annie a good food dryer and a spice grinder will give you a lot. you can dry tomatoes and powder them. That you can use in place of tomato paste or sauce. You can powder carrots to thicken things. One can puree fruit to make leather with a food processor. I have all the fancy gadgets but one can get by with less. But a good food dryer is worth every penny

Made some cider the natural fermented way a cpl years ago- only problem was how to ration it out- it was so delicious! Happy apple-ing!

I am always amazed by the number of gadgets you guys get hold of. The steam juicer is a great thing but I am harvesting pistachio nuts at the moment. In your arsenal of gadgets do you have, or know where to get, a pistachio hulling machine suitable for small scale use?

Hi,
This is a very interesting gadget ! Can anybody suggest a simpler way by using utensils at home as this steamer is not available in Mauritius and ordering will cost a huge amount !We have some seasonal fruits like china guavas which go rotten and we could juice them
Thanks for answering
Allen

wow how cool! I have never seen this before and love it. How much did one of those cost?

Great post, the steam juicer is a new one for me. Your posts are inspiring, keep it up.

I have a steam juicer just like yours and is new to me. Did you have problems yielding juice from your apples? I felt like mine had to cook for hours and hours (4-6+) just to get 12-16 ounces of juice. Have you had this problems? If not what time of apples did you use. Thanks

Hi Nikki – yes it definitely depends on the apple and its juice content (which varies, of course) – we used and the mangled small ones that weren’t suitable for drying, or all types…

0
Reply
Go to Top
wpDiscuz
12
0
Would love your thoughts, please comment.x
()
x
| Reply
Send this to a friend